Materials and Methods: We report a case of successful liver transplant for fulminant hepatic failure in the presence of active tuberculosis infection.

Conclusions: Liver transplant can be performed in cirrhotic patients with active infections, such as tuberculosis, as a life-saving procedure.

Case Report
A 48-year-old man was transferred to our hospital with fulminant hepatic failure. The patient had been followed with hepatitis C virus infection (genotype 1b), and a biopsy confirmed liver cirrhosis in 1999. Antituberculous therapy (isoniazid 300 mg/d, rifampin 600 mg/d, ethambutol 1500 mg/d, and pyrazinamide 1500 mg/d) was started for pulmonary tuberculous infection at January 2007. Two months later, the patient was admitted to a local hospital with fatigue, malaise, and jaundice. Despite cessation of antituberculous drugs, the patient became unconscious, and was transferred to our intensive care unit on mechanical ventilatory support. Plasma exchange and hemodiafiltration were immediately applied. Computed tomography of the thorax revealed a cavity on the right lung (Figure 1A). A positive tuberculin skin test also was noted. The patient’s medical condition worsened, and a living-donor right lobe liver transplant was performed on the third day of intensive care admission.

With the intensive pulmonary care, the patient recovered and was transferred to the transplant ward at the first postoperative week. Low-dose immunosuppressive therapy including tacrolimus, mycophenolate mofetil, and prednisolone was started right away, and prednisolone treatment was stopped at the end of the first week. Antituberculous treatment was started at seventh day after surgery with isoniazid 300 mg/d, rifampin 600 mg/d, ethambutol 1500 mg/d, and pyrazinamide 2000 mg/d. The patient was discharged on the 25th day after surgery.

Control and eradication of the active tuberculosis infection are generally offered during preoperative care for transplant candidates. However, antituberculosis treatment has a significant rate of hepatotoxicity (4, 5). This adverse effect increases in the presence of chronic liver disease. Isoniazid and rifampin are especially accused for this adverse effect (2, 3, 5, 6). Either of these drugs, or a combination regimen, induces liver injury. Rifampin also may indirectly lead to increased production of toxic metabolites of isoniazid owing to induction of hepatic microsomal enzymes (5). Isoniazid toxicity is related to the genotype of cytochrome P450 2E1 and N-acetyl transferase, which are the main components of isoniazid metabolism and therefore, production of toxic metabolites (7). Hepatotoxicity usually occurs in 10% to 20% of patients treated with isoniazid (5, 8).

Management of active tuberculosis after liver transplant is difficult. An optimal antituberculous regimen has not been widely accepted. The duration of treatment and follow-up are other problematic issues. Clinical experience on these issues is obtained mostly from reactivation of latent infection in patients with previous exposure. Rifampin and isoniazid are generally accountable for pretransplant hepatotoxicity, and they cease after liver transplant in most cases of fulminant hepatic failure (2, 3, 6, 12). However, both drugs are considered the main components of effective antituberculosis treatment.

Strengthening treatment is provided by lengthening the cure of nonhepatotoxic drugs. Ciprofloxacin, streptomycin, pyrazinamide, cycloserine, and ethambutol are preferable for less hepatotoxic antituberculosis treatment. Duration of treatment is proposed for long as 24 months (2, 3, 6, 12). Short-term treatment (6 months to 1 year) is generally associated with recurrence of the disease (13). Negative sputum cultures and improved chest radiographic findings are determinants of cessation of treatment. Especially during follow-up of cavity lesions in the lung, tomography of the thorax receives an additional advantage for the decision to terminate therapy.

The power of less hepatotoxic antituberculosis treatment is questionable. Despite its hepatotoxic effects, administration of isoniazid is preferred for eradication of pulmonary tuberculosis after liver transplant (12). Three cases were followed without toxic adverse effects. Three of the first-line agents—izoniazid, rifampin, and ethambutol—are active against the large populations of tubercle bacilli in cavities. Isoniazid and rifampin have bactericidal activity against tubercle bacilli in the cavity, intracellular, or necrotic foci (14). As well-described in classic public health approach, a short course of therapy with effective drugs (isoniazid and rifampin) could be considered for those patients who present with tuberculosis some months to years after transplant (2, 12, 13). However, insufficient experience of the effectiveness of both drugs in the early posttransplant period has been noticed.

According to the presence of active pulmonary tuberculosis in our case, we preferred isoniazid- and rifampin-containing regimen for treatment after surgery. Possible drug interactions are considered as the main problem in rifampin therapy (15, 16). Rifampin increases catabolism of immuno­suppressants, which may lead to rejection if immunosuppressant levels are not monitored carefully. Discontinuation of the antituberculosis treatment may be required in addition to rejection therapy, as was true in our case. Follow-up of liver functions is mandatory for isoniazid therapy after liver transplant (2, 12-16). Susceptibility of the new graft to isoniazid toxicity may be determined with genotype testing of liver cytochrome P450 and N-acetyl transferase (7). However, other states associated with deterioration of liver functions (eg, biliary problems or recurrence of original disease) should be mentioned during follow-up. Discontinuation of the antituberculosis therapy, determination, and treatment of the cause of deterioration are considered rational.

In conclusion, liver transplant is a feasible and effective therapy for active tuberculosis infection as a life-saving procedure. Despite the well-known adverse effects of isoniazid and rifampin therapy, it may be inevitable to use both drugs to achieve effective control of active, pulmonary tuberculosis after transplant. Close follow-up and timely distinguishing of drug toxicity from other posttransplant problems are most important issues during treatment. 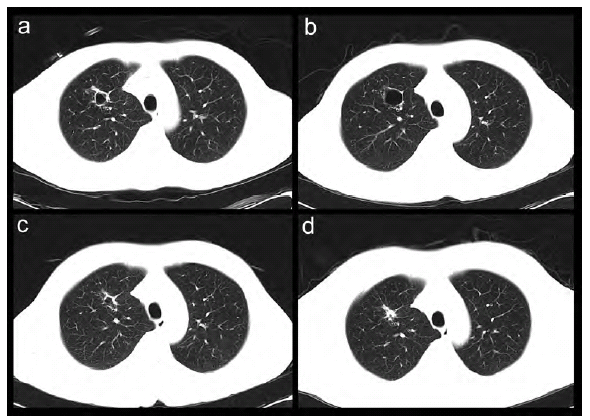 Figure 1. 1A. Cavitating pulmonary tuberculosis observed in the right hemithorax.

1B. Continuity of active pulmonary tuberculosis cavity was revealed 100 days after surgery.

1C. Shrinking of the tuberculous cavity was shown 155 days after surgery.

1D. Cavity was replaced with residual calcification 340 days after surgery