Objectives: Hand-assisted laparoscopic donor nephrectomy has become an established technique for live-donor organ retrieval. In most cases, the left kidney is removed because of its more favorable anatomic relations, particularly with the major abdominal vessels.

Materials and Methods: We present 2 cases of live donation in which a hand-assisted laparoscopic approach was used to remove the right kidney as indicated by the presence of aberrant vascular anatomy, 1 being situs inversus totalis, the other a left-sided inferior vena cava.

Results: A 41-year-old woman and a 51-year-old man underwent assessment for live-kidney donation. During preoperative investigation, they underwent magnetic resonance imaging that demonstrated situs inversus totalis and a left-sided inferior vena cava. No contraindications to live donation were found during the investigation. In both cases, a right donor nephrectomy was performed owing to an anatomically longer right renal vein. Living donation proceeded without complication in both cases, and both patients had uneventful recoveries.

Conclusions: Abnormalities in vascular anatomy should not be considered an absolute contraindication to donation, even by the hand-assisted laparoscopic donor approach. The use of magnetic resonance scanning preoperatively allows detailed planning of the approach required.

Living-renal donation has become increasingly used as the demand for transplants has outstripped the supply of deceased donor organs. Over the past decade, minimally invasive techniques have become the established method by which kidneys are removed from live donors. However, owing to reduced access, it has become conventional wisdom that the vascular anatomy of the renal tract should be as simple as possible. For this reason, the left kidney is usually removed, as the renal vein on this side is longer and more distant from the inferior vena cava (1).

Routine preoperative imaging by computed tomography scanning, and magnetic resonance angiography is performed. The quandary of whether to proceed to donation is raised if vascular anomalies are identified.

Various anomalies are described; those of the great vessels and particularly, the inferior vena cava are rare with a reported incidence of 0.2% to 0.5% (1). However, this report describes 2 such anomalies that although complex, did not preclude donation using a minimally invasive approach and resulted in successful functioning transplants with no adverse effects for the donors.

Both potential donors were evaluated using published British Transplantation Society guidelines (2). The aim is to ensure the patient’s fitness to undergo surgery; establish anatomic suitability for donation of the kidneys and urinary tract, and assess preoperative renal function. As per established protocols, magnetic resonance imaging was used to assess renal tract anatomy, with particular reference to vascular anatomy.

Case 1: Situs inversus: A 41-year-old woman underwent magnetic resonance angiography as part of her evaluation as a potential live-kidney donor. This demonstrated situs inversus totalis with a left-sided inferior vena cava and aorta right of the midline (Figure 1). There were single renal arteries to each kidney, and a right renal vein measuring 7.6 cm in length (Figure 2). The remainder of the preoperative assessment revealed no contraindications to potential donation.

Case 2: Left-sided inferior vena cava: A 51-year-old man underwent magnetic resonance angiography for preoperative assessment for potential live donation, which demonstrated a left-sided inferior vena cava as a continuation of the left renal vein. There was a right renal vein measuring 4.8 cm in length, and single renal arteries bilaterally, with no other contraindications to renal donation.

In both cases, a right donor nephrectomy was performed owing to an anatomically longer right renal vein. The patient was positioned in a modified lateral decubitus position at a 60° angle, with the left side down, facilitating access to the space between the costal margin and iliac crest. Ports were then placed as follows: a 6-cm right iliac fossa incision was placed for the insertion of the hand port; three 10-mm ports were inserted in the right flank and hypochondrium, and a pneumoperitoneum insufflated. Hand-assisted right-donor nephrectomy then was performed as for a standard right nephrectomy.

Both patients were able to mobilize on the first postoperative day. The first patient was discharged home on day 3 postoperatively, while the second patient’s discharge was delayed to day 6 by a postoperative, uncomplicated chest infection, requiring physiotherapy and antibiotic treatment. At 5 weeks’ follow-up, both donors were fit to return to normal duties with no prolonged adverse effects. Both recipients made good recoveries with good graft function at follow-up.

Limitations in organ donor supply remain a significant problem in improving outcomes for patients with end-stage renal failure. It is becoming imperative that the potential live-donor pool is expanded, a process that has been successfully achieved with the advent of hand-assisted laparoscopic donation, with a rapid recovery and return to normal activities (3, 4).

The left kidney is usually used for donation owing to the vascular anatomy of the renal tract, allowing removal of a longer renal vein, more-distant from the inferior vena cava (1). However, even in cases of normal vasculature, there is expanding evidence that management of the shorter right renal vein may be possible, thereby allowing for more available organs for transplant (5). Vascular anatomy remains critical, both in terms of allowing safe donation, as well as suitable conditions for graft implant and subsequent successful graft function.

Situs inversus totalis, the left-to-right transposition of all internal organs, was first described by Matthew Baille in 1788. It is a rare, congenital anomaly associated both with vascular and visceral abnormalities and intestinal malformations (6-8). Situs inversus is typically first diagnosed incidentally during diagnostic imaging for other conditions. It is often associated with other congenital abnormalities, such as polysplenia, Ivemark syndrome, Kartagener’s syndrome, and biliary atresia, but can be expected to be associated with a normal life expectancy (8-12).

Although organ retrieval for liver transplant and deceased-donor donation have been well-documented with situs inversus or inferior vena cava abnormalities, there are scanty data to demonstrate hand-assisted laparoscopic donation nephrectomy in this situation (13, 14). Cases of left-sided inferior vena cava have been reported in association with donor nephrectomy, but remain rare (15-17). We present 2 cases of potential live donation with anatomic variations in venous anatomy (situs inversus and left-sided inferior vena cava). These result in an anatomic “mirror image” of the inferior vena cava, resulting in the longer renal vein, advantageous for donation, being found on the right side. In both, there were no definitive contraindications to surgery once anatomic landmarks had been clearly demonstrated before surgery.

Although cosmetic considerations may direct the approach and are an important consideration in planning minimally invasive surgery, and total laparoscopic approaches have been used in harvesting kidneys with aberrant anatomy, the overriding principles with kidney donation remain safety of the donor, while ensuring minimal insult to the kidney (15). The hand-assisted laparoscopic donation is a technique that achieves both these objectives (18, 19). These factors, coupled with a shorter learning curve (compared to a totally laparoscopic approach), make hand-assisted laparoscopic donation a viable alternative particularly in cases of aberrant anatomy.

There is only 1 previous case of hand-assisted laparoscopic donation reported in situs inversus, with the use of preoperative computed tomography scanning to aid in planning before surgery (13). It would appear that our use of magnetic resonance angiography may be a useful adjunct to preoperative planning, and allow accurate delineation of any other potential anatomic variants, with particular reference to vascular anomalies and their subsequent effect on the surgical approach to donor nephrectomy.

The surgical approach must be tailored for individual anatomic variations based on appropriate preoperative radiologic imaging. Hand-assisted laparoscopic donation as a surgical approach to donor nephrectomy in renal transplant is now well-established and can be modified, even in the presence of venous abnormalities to permit donation in an advantageous method for the donor.

Aberrant anatomy previously has been considered a contraindication to potential live donation. However, abnormalities in vascular anatomy, in conjunction with normal physiology and otherwise normal anatomic relations are not a contraindication to successful donation with suitable preoperative radiologic imaging (magnetic resonance angiography). In addition, with only minor adaptations to the hand-assisted laparoscopic donation technique, a safe and successful donor operation can be easily performed. 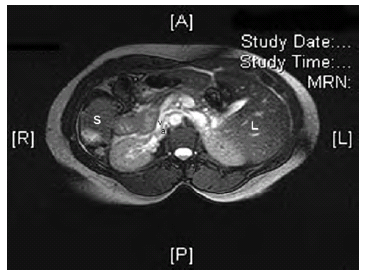 Figure 1. Coronalmagnetic resonance image showing situs inversus. The liver (L) is lying in the left upper quadrant, with the spleen (S) on the right. The right kidney has the characteristic anatomy of a left kidney,with a short artery (a) and long vein (v). 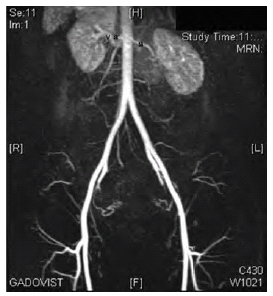