Estimated Glomerular Filtration Rate in Patients With Surgically Acquired Single Kidney Compared With Patients With Congenital Single Kidney: Implications For Kidney Transplant From Live Donors
Florica Nicoleta Gadalean,1 Gheorghe Gluhovschi,1 Virginia Trandafirescu,1 Ligia Petrica,1 Silvia Velciov,1 Gheorghe Bozdog,1 Cristina Gluhovschi,1 Flaviu Bob,1 Corina Vernic2
Objectives: The pathophysiology of the single kidney is involved in the evolution toward end-stage renal disease. Furthermore, most data suggest that the renal function of the donor is maintained after nephrectomy. This study sought to analyze the difference between surgically acquired single kidney and the congenital single kidney, regarding kidney function at a similar moment in time of the existence of a single kidney.

Materials and Methods: Two groups were enrolled in this study. Group A consisted of 28 patients with surgically acquired single kidney, time from nephrectomy was 30.23 ± 10.82 years; mean age, 54.42 ± 14.99 years. Group B consisted of 20 patients with a congenital single kidney (mean age, 30.3 ± 10.43 years). We assessed glomerular filtration rate (Modification of Diet in Renal Disease 4 Study Equation) and the presence of classic and nonclassic risk factors for chronic kidney disease.

At the beginning of the 1980s, Brenner and associates showed that nephrectomized rats demonstrated compensatory adaptive changes (ie, hypertrophy and hyperfiltration) in the remaining kidney (2). These structural and functional changes are involved in proteinuria, arterial hypertension, and progressive functional renal changes including end-stage renal disease.

Patients born with a single kidney have an increased risk of renal function decline because compensatory adaptation mechanisms begin at birth (3, 4, 5, 6, 7). On the other hand, some authors uphold the hypothesis that a single congenital kidney possesses twice the nephrons of a kidney of a binephric individual. Twice the nephrons would negate compensatory adaptive hyperfiltration and hypertrophy (8, 9).

In clinical practice, the majority of people born with unilateral renal agenesis have stable renal function and a good prognosis for several decades (10, 11). Frequently, this urinary anomaly is diagnosed incidentally when patients are examined for other renal diseases, such as urinary tract infections or nephrolithiasis.

The question to be considered is whether patients with surgically acquired single kidney and patients with congenital single kidney have similar renal function at a comparable time interval. This is one of the most-interesting and controversial problems debated in the literature.

Group B consisted of patients with a congenital single kidney (n=20; 45% male; n=9; 55% female; n=11; aged 17-54 years; mean age, 31.30 ± 10.43). The study conforms with the ethical guidelines of the 1975 Helsinki Declaration. Written informed consent was signed from the patients and the Hospital Ethics Committee approved the study protocol.

Characteristics of the patients studied with regard to the clinical and biological data are presented in Table 1. There was a statistically significant age difference between groups A and B (P < .001), which was required to analyze kidney function at a comparable time interval. To avoid this difference, patients with unilateral nephrectomy in childhood would have been necessary (which is obviously difficult to obtain). We also observed statistically significant differences between groups A and B for the following factors: systolic blood pressure (P = .0423), duration of hypertension (P < .001), serum cholesterol (P = .0183), and cardiovascular disease (P = .008), which reflect existing data in the literature (14-18), and these differences are explained by the age differences between the 2 groups. Epidemiologic studies have shown that hypertension is significantly associated with age (15, 16). A data series showed that the prevalence of high-isolated systolic blood pressure sharply increased with age in both men and women (17). Dyslipidemia also was significantly associated with age (18).

In group B, chronic kidney disease risk-factors analysis revealed statistically significant differences between the subgroup of patients with normal renal function (1B) versus patients with chronic renal disease (2B) for the following parameters (Table 3): mean age (P = .006), proteinuria (P < .0001), C-reactive protein (P = .022), serum triglycerides (P = .044), and body mass index (P = .0091). There was no difference in hypertension between the 2 subgroups, but we did observe that in these patients hypertension starts at a younger age (27.63 ± 9.26 years).

Previous studies concerning patients with congenital single kidney or surgically acquired single kidney discuss the long-term risk of progressive alteration of renal function. In some cases, this may lead to end-stage renal disease (5, 19-21). Other authors have observed that patients with a single kidney have a renal function comparable to that of people with 2 kidneys (6, 22-25). Especially important are the additional studies where single kidneys are at risk for superimposition of another disease, such as diabetes mellitus; this is also an important consideration for living-kidney donors (26).

In the case of a surgically acquired single kidney, the reduction by 50% of the number of nephrons leads to adaptive compensatory changes at the level of the remaining nephrons. Thus, in the first hours after nephrectomy, there is an increase in the glomerular filtration rate. After 30 days, glomerular filtration rate reaches 69% of the prenephrectomy value (27). The remaining nephrons are affected by hypertrophy and hyperfiltration that in line with Kriz’s “overload” theory can trigger glomerulosclerosis. A vicious circle occurs in which the stimulus represented by the reduction of nephrons produces compensatory changes in the remaining nephrons that will lead to glomerulosclerosis and the loss of the functionality of the nephrons (28).

Thus, patients with unilateral renal agenesis are protected from the compensatory mechanisms of hyperfiltration and hypertrophy that can lead glomerulosclerosis, hypertension, proteinuria, and alteration of renal function (8, 31, 32).

Some authors suggest that congenital single kidney presents an increased risk of hypertrophy and hyperfiltration, glomerulosclerosis and progressive alteration of renal function. Other studies report renal function alteration in 13% to 43% of patients with single renal agenesis (3, 5, 19, 20).

We conclude that a surgically acquired single kidney and a congenital single kidney have similar long-term behaviors regarding functional adaptability to this condition.

Age
In our study, the comparison between the groups A and B revealed a statistically significant difference for mean age (P < .001). This is due to the starting point in the comparative assessment to obtain a similar period of single kidney existence in both groups. For age to be equivalent across groups, children with unilateral nephrectomy would be necessary (who are obviously difficult to obtain). In addition, nephrectomies, for therapeutic purposes or for organ donations, are carried out, in most cases, on adults. For this reason, the authors considered that analyzing a group of underaged nephrectomized patients as being nonrepresentative for the purpose of this study.

We found that age is a risk factor for renal function decline in both groups. A strong, indirect correlation was found for both groups between glomerular filtration rate and age (Table 4 and Table 5); this finding is in agreement with previous literature data (23, 33).

According to the literature, the time criterion is necessary to correctly assess risk in patients with a single kidney (5, 26, 34).

The prevalence of hypertension in patients with a single kidney is increased when the follow-up is prolonged (5, 20, 39). Heinonen found that pregnant women with single kidney agenesis and uterine anomalies had a 2.3-fold increased risk for gestational hypertension, preeclampsia, or gestational proteinuria (40). In nephrectomized adults, the study of the single kidney-hypertension relation is difficult, because blood pressure increases with age. Studies have shown that nephrectomized patients had significantly increased blood pressure values compared with individuals with 2 kidneys (23, 41, 42, 43).

Proteinuria
In our study, a statistical comparison between the 2 groups revealed no significant difference for proteinuria (P > .05). Risk factor assessment for chronic kidney disease progression revealed that proteinuria is a common risk factor in both groups, and there is a strong indirect correlation between proteinuria and glomerular filtration rate (Tables 4 and 5). Our study revealed the presence of proteinuria in 42.8% of group B patients (12p) and in 55% of group A patients (11p); this agrees with the data provided by another study using a follow-up of the single kidney of 26 years (6). We emphasize that proteinuria is a statistically significant factor for chronic kidney disease progression in both groups of patients, concordantly with other studies (44, 45).

Proteinuria is a known risk factor for renal function decline in patients with a surgically acquired single kidney and is the consequence of the adaptive hypertrophy and compensatory hyperfiltration phenomena (5, 23, 46, 47). In the case of patients with congenital single kidney, studies find that the prevalence of proteinuria increases with the duration of the follow-up (5, 6, 20, 48).

Inflammation markers: C-reactive protein and fibrinogen
Several studies have shown that inflammation is an important risk factor for chronic kidney disease progression. Inflammation is associated with the prevalence, progression, and prognosis of renal dysfunction (49-53).

Obese and overweight patients
Praga and Gonzales reported that obesity is associated with an increased risk for renal dysfunction in patients with a single kidney (26, 46, 55). Our study confirmed these results, but only in group B. According to Praga, overweight patients with a single kidney have an increased risk of proteinuria and renal dysfunction through increased hypertrophy and compensatory hyperfiltration phenomena (46).

Our study has several limitations. First, the number of patients was small. Second, there was a statistically significant difference between the ages of the 2 groups; to overcome this, a group of children with unilateral nephrectomy would have been necessary (which is obviously difficult to obtain).

Perspectives
This paper underscores the necessity of performing prospective studies on patients with single kidney, whether surgically acquired or congenital, for a better medical assessment of nephrectomy risks, especially in the situation of living donors.

A follow-up of patients with a single kidney is required to monitor microalbuminuria, serum creatinine, and arterial blood pressure every 2 years (58). Our results indicate that patients with a single kidney do not have an increased risk of end-stage renal disease and have the potential for favorable implications for transplant from live kidney donors. 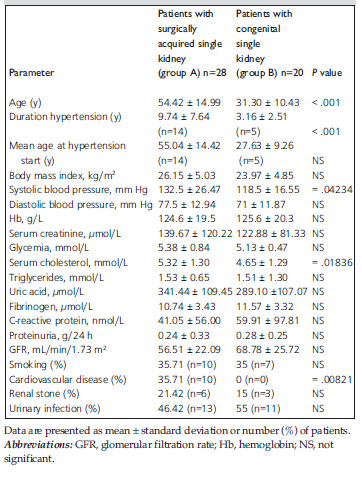 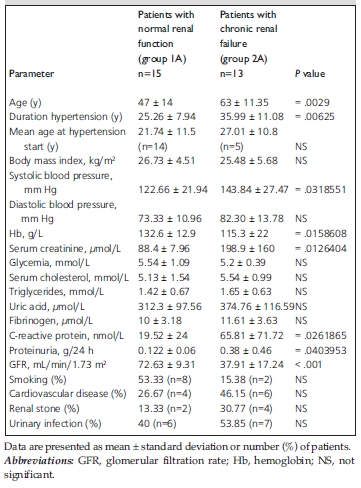 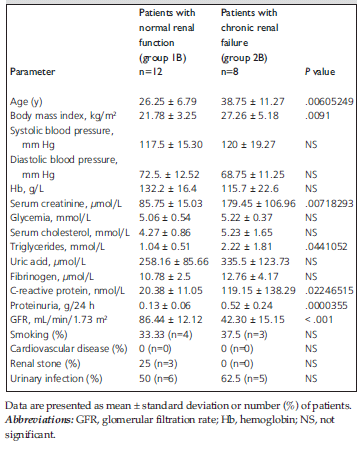 Table 3. Clinical and biological characteristics of patients with congenital single kidney (group B).