Materials and Methods: Fifty-one liver transplant recipients with at least 3 months’ follow-up were selected and genotyped for CTLA-4 CT60 polymorphism (HpyCH4 IV). The association of each genotype with allograft acute rejection was evaluated.

Conclusions: CT60 A/G dimorphism within the 3'-UTR of CTLA4 gene does not influence acute rejection development in liver transplant. However, organ rejection is determined by a combination of several genetic traits rather than a single gene. Therefore, more studies with larger patient numbers are necessary to investigate the effect of combinations of genetic phenotypes involved in this process.

Cytotoxic T-lymphocyte antigen-4 (CTLA-4), encoded by a gene on chromosome 2q33, is expressed by activated T lymphocytes and plays an important role in down-regulation of immune responses. It interacts with the B-7 cell surface molecule on antigen-presenting cells and inhibits T-cell activation (1, 2). CTLA-4 plays an important role in the contribution of CD4+CD25+ regulatory T-cells, and also inhibits IL-2 production (3, 4).

This polymorphism is strongly associated with some immune-mediated diseases, for example, Graves’ and autoimmune thyroid diseases (9, 10) with relapse and graft-versus-host disease in allogenic stem cell transplant (11), and also with acute rejection in liver transplant recipients (12).

We studied a limited number of liver transplant patients. The CTLA-4 single-nucleotide poly-morphism was determined in recipients, as the recipient’s T cells participated in graft acute rejection.

A consecutive series of 51 liver transplant recipients, between January to June 2008, were included. All patients were Iranian and were transplanted at the Transplantation Center of Nemazi Hospital affiliated with the Shiraz University of Medical Sciences. Written informed consent was obtained from all participants and the study protocol was approved by the Ethics Committee of Shiraz University of Medical Sciences. The protocol conforms with the ethical guidelines of the 1975 Helsinki Declaration. Patients were followed up for at least 3 months, and episodes of acute rejection were recorded in this time. An acute rejection episode was defined based on clinical or biopsy findings according to Banff criteria (13). Clinical rejection was identified as fever or an increase in bilirubin levels in the absence of infection, obstruction, or evidence of drug toxicity. The protocol biopsy was not routinely performed in our center. Routine immuno­suppression regimen consisted of tacrolimus or cyclosporine with mycophenolate mofetil and steroids. Acute rejection episodes were managed with high-dosages of methylprednisolone. Steroid-resistant cases were treated with antithymocyte globulin.

In this study, patients were divided in 2 groups according to the presence (AR group) or absence (non-AR group) of acute rejection episodes.

The mean age of patients was 27.9 ± 15.17 years (minimum, 1 year; maximum, 55 years), with 39% male and 61% female. Indications for liver transplant and distribution of CTLA-4 CT60 genotypes according to primary liver disease are summarized in Table 1. The most-common causes of liver disease were cryptogenic cirrhosis (n=14; 28%), hepatitis B virus infection (n=10; 18%), and autoimmune hepatitis (n=7; 14%). Overall, 17 recipients (33.3%) experienced acute rejection within the first 3 months after a liver transplant; in 8 patients (47%), the diagnosis was confirmed by histology.

To better evaluate of possible influence of underlying liver disease on the risk of rejection, patients were classified according to their diagnosis for liver transplant into the following categories: viral liver infection (chronic hepatitis B or hepatitis C virus infection), autoimmune-related liver disease (autoimmune hepatitis or primary sclerosing cholangitis), and others (which contained all other diagnoses) (Table 2). Most patients were transplanted for chronic viral hepatitis or autoimmune-related liver disease did not show any rejection episode. Among patients transplanted for cryptogenic cirrhosis, the number of rejecters was equal to the number of nonrejecter recipients. In our study population, these disorders were not related to acute rejection after transplant. The relation between age, sex, and CTLA-4 CT60 genotype, with acute rejection, is also summarized in Table 3. Rejecters and nonrejecters did not differ in sex, age, and distributions of CTLA-4 CT60 alleles.

CTLA4 (Cytotoxic T-Lymphocyte Antigen 4), known as CD152, is a protein, and plays an important regulatory role in the immune system and transmits an inhibitory signal to T cells. It is supposed that even under immunosuppression, CTLA-4 is involved in the regulation of the human immune response to transplanted grafts. The 5 polymorphic sites of the CTLA-4 gene included 3 in the promoter region (-1661 G/A, -658 T/C, -318 T/C), one in exon 1 (+49 G/A) and one in 3’-untranslated region (CT60 G/A) (7, 8). Ueda and associates proposed that 3'-untranslated region of the CTLA4 gene determines the efficiency of the splicing and production of soluble CTLA4 (sCTLA4) (7). These authors observed a reduction in mRNA expression of the soluble CTLA4 isoform in the presence of a G allele at CT60 (7, 14).

There are several studies that evaluate the effect of polymorphism in the T-cell regulatory gene cytotoxic T lymphocyte antigen 4 (CTLA4) with acute rejection in liver transplant recipients (12, 15-18).

de Reuver and associates studied the influence of functional, single-nucleotide polymorphisms of CTLA4 -318 and CTLA4 +49 on the rate of rejection after liver transplant and suggest that recipients homozygous for CTLA-4 +49 G have a reduced risk of acute rejection (15).

Tapirdamaz and associates evaluated the CTLA-4 +49 A/G and +6230 G/A single-nucleotide polymorphisms on the rate of rejection after liver transplant. The +49A/+6230G haplotype was significantly and dose-dependently associated with acute rejection (17).

Muro and associates studied on the effect of CT60 A/G polymorphism and found that the CT60 G allele was significantly associated with acute rejection episodes (12).

This study did not show any association of CTLA-4 CT60 polymorphism with acute rejection in liver transplant. However, organ rejection is determined by a combination of several genetic traits rather than a single gene. According to Nickerson’s opinion, differences in genetic phenotypes may be responsible for the interindividual alloimmune responses in renal and liver transplant recipients (18).

Therefore, more studies with larger patient numbers, as well as a healthy control group, are necessary to investigate the effect of combinations of the factors involved in this process. 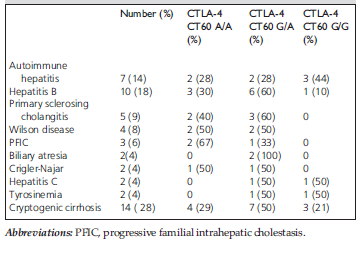 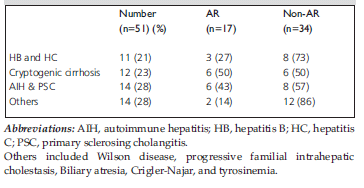 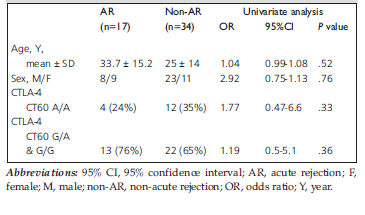 Table 3. Characteristics of patients and their influence on the incidence of acute rejection.