Objectives: Observations of minimal patho­physiological changes in the liver with healthy aging represent the rationale for expanding the donor pool with older donors. However, a debate exists for their upper age limit. The aim of this study is to examine the outcomes of orthotopic liver transplants from older patients (≥ 60 years).

Materials and Methods: Using the Organ Procurement and Transplant Network/United Network for Organ Sharing (OPTN/UNOS) data, we retrospectively analyzed graft and patient survivals of orthotopic liver transplants done with octogenarian grafts (n=197) and compared them with orthotopic liver transplants done with donors aged between 60 and 79 years (n=4003) and < 60 years (n=21 290) during 2003 to 2007.

Donor age is one of the vital criteria used for donor selection in solid organ transplant. Conservative approaches toward age ensure quality of the donor organ; however, applying too severe a restriction could unwittingly exclude organs that would be suitable for transplant. Considering the ongoing organ shortage and rapid expansion of the geriatric population, liberalization of donor age is a realistic means to augment the donor pool. Nevertheless, the main issue is whether older organs confer a survival advantage, as with younger donors. In this facet, the liver appears to be a privileged organ, as age-related pathophysiological changes are minimal, and overall liver functions remain well-preserved with healthy aging (1, 2). Although, many initial studies report a higher risk of primary nonfunction, initial poor function, and transmission of occult tumors with older donors (3-7), several recent reports show that even donors > 80 years can be used with satisfactory results in a select group of patients (8-14). Yet, there is a lack of a clearly defined upper age limit for their acceptance, reflected in the variation of policies among transplant centers.

In this study, we reviewed the outcomes of orthotopic liver transplants in terms of graft and patient survival in recipients of octogenarian grafts compared with recipients of hepatic allografts from deceased donors aged < 60 years and 60 to 79 years using United Network for Organ Sharing (UNOS) data (15).

Data of all orthotopic liver transplants done from deceased donors older than 80 years between 2003 and 2007 were studied and compared with orthotopic liver transplants done from donors aged 60 to 79 years and < 60 years during the same time. All information regarding donor and recipient characteristics and outcomes was collected from the Organ Procurement and Transplant Network/United Network for Organ Sharing (OPTN/UNOS) as of August 20, 2008.

The following donor characteristics were evaluated: age, sex, ethnicity, cause of death, and donation after cardiac death. The following pretransplant recipient data were collected: age, sex, ethnicity, model for end-stage liver disease score, hepatitis C virus-seropositive recipients, waiting time, and any requirement of ventilatory support before transplant. The following perioperative data were collected for graft: liver graft biopsy, local share of the organ, distance (in miles) traveled by the organ procurement team to the recipient center, and cold ischemia time. Length of posttransplant hospital stay, and 1- and 3-year patient, and graft survival rates were analyzed for all recipients.

During the study, 4200 orthotopic liver transplants were done from deceased older donors (60-79 years, 4003; ≥ 80 years, 197) constituting 16.5% of the total liver transplants done during this time in the United States. The percentage of contribution by donors ≥ 80 years was 0.8%.

Table 1 illustrates the various donors, graft, and recipient characteristics studied. Group C (donors ≥ 80 years) composed of a significantly higher number of female donors compared with groups A (P < .001) and B (P = .001). Group C had significantly a higher percentage of whites compared to group A (P < .001) but not to group B. Group C constituted a lower percentage of donors who died due to trauma or donation after cardiac death as compared to groups A and B (P < .05). There were no hepatitis C virus-seropositive donors in group C, compared to 3.2% in group A (P < .05) and 0.9% in group B (P > .05). Liver biopsy was done in 53.3% of grafts in group C compared to 50.2% and 27.1% of grafts in groups B and A. There was no significant difference for cold ischemia time among the 3 groups (P > .05). A significant number of octogenarian grafts was not used locally (P < .001) and led the organ procurement team to travel significantly longer distances (P < .001).

Pathophysiologically, compared with other organs and tissues of the body including heart, lungs, and kidneys; age-related morphologic, ultrastructural, and functional alterations are minimal in the liver (2). These alterations include a reduction in mass, variation in size of the hepatocytes and their mitochondria, tendency toward nuclear polyploidy, reduction in phagocytosis of Kupffer cells, endocytosis of endothelial cells, reduction in blood flow, increase in lipofuscin pigment, and alterations in various hepatic functions including protein synthesis, drug metabolism, and biliary secretion (1, 2). Yet, the overall liver functions remain well-preserved owing to effective counterbalance by large, functional reserve; regenerative capacity; and the dual blood supply of the liver. Additionally, abdominal visceral vessels were less frequently affected by atherosclerosis owing to unknown reasons (16). All these observations represent the biological rationale for expanding eligibility to older donors.

,The present study shows comparable 1- and 3-year graft and patient survival among older donors > 60 years. This must have been due to the interplay of various donor, recipient, and technical factors. A significant number of females and whites are represented in the older donor groups. This corresponds to a higher life expectancy observed among women in the United States and may have contributed to favorable outcomes as women and whites have been reported with lower incidence of steatosis (17). Less than 20% of trauma death donors were present in groups B and C (Table 1). This is consistent with the fact that cerebro-cardiovascular attacks are the most-common cause of mortality in elderly age group in the United States. This might have contributed to outcome favorably among the recipients of grafts from these donors as trauma leads to more hemodynamic instability and physiologic disturbances causing greater sensitivity to ischemic injury in relation to the length of cold ischemia time (8).

Initially, a liver biopsy was recommended routinely for older donors as they were expected to have high prevalence of moderate-to-massive steatosis, hepatitis C virus-related cirrhosis, malignancy, and other comorbid conditions including diabetes, atherosclerosis, and heart disease (2). In the present study, liver biopsy was performed in more than 50% of donors aged > 60 years. Estimation of steatosis and detection of small tumors or micrometastases are both difficult and subjective on frozen section liver biopsy (18, 19). Additionally, it has been found that livers can be successfully used with macrovesicular steatosis < 40% and microvesicular steatosis > 60% (20), reserving graft biopsy for hepatitis C virus-positive donors only, donation after cardiac death, or if multiple extended criteria donor factors are involved (21).

In accordance, the attitudes of the procurement team are crucial in the careful evaluation of older donors by searching for any liver or systemic diseases including solid tumoral lesions and discarding them if risk factors for primary nonfunction or initial poor function are present. The other key factor, which may contribute to good clinical results, is maintaining a mean preservation time between 4 and 6 hours (3, 22). In the present study, cold ischemia times were relatively higher (> 7 hours) in all groups, but there was no statistically significant difference among the 3 groups. The higher cold ischemia times for octogenarian grafts was partly due to denial of their use by local centers causing organ recovery teams to travel significantly longer distances (P < .001), suggesting the need for defining the upper age limit for donor acceptance.

The model for end-stage liver disease score is a scoring system solely based on the characteristics of potential liver transplant candidate and estimates risk of death without transplant (23). Earlier, the interaction and relation between donor quality and recipient disease severity was not defined; however, the observation of lower model for end-stage liver disease score among recipients of octogenarian grafts in the present study showed comparable 1- and 3-year graft and patient survival between groups B and C suggesting that the survival benefit is a function of candidate disease severity and donor quality. Another study comparing the results of immediate transplant with expanded criteria livers with delayed transplant using a “standard” donor organ observed the similar findings (24). Concomitantly, these results do not justify use of these donors in patients with a lesser model for end-stage liver disease score (< 15) as they have significantly better chance of survival continuing to wait on the waiting list (25).

Hepatitis C virus-related chronic liver disease is the most-common indication for liver transplant. Except for a few studies (26), all studies evaluating the graft and patient survival by disease caused by the of livers from older donors consistently reports worse outcomes in hepatitis C virus-seropositive recipients compared with recipients with other causes of cirrhosis (14, 27-29).

Studies report the risk of graft loss for hepatitis C virus recipients increased linearly from a hazard ratio of 1.67 for donors 41 to 50 years old to a hazard ratio of 2.21 for donors older than 60 years (27, 28). This significant decrement in graft and patient survival for hepatitis C virus-infected patients can be attributed to several age-related changes in the older livers like age-associated pseudocapillarization of the sinusoidal endothelium (thickening and defenestration) affecting the hepatic microcirculation and stellate cell activation (30). Transplanting provides additional potential mechanisms to promote stellate cell activation, including ischemia-reperfusion injury, infections with other viruses such as cytomegalovirus, and acute rejection treated with steroid boluses. Comparable outcomes among recipients of older donor organs in this study might be due to the smaller proportion of hepatitis C virus-seropositive recipients in groups B and C with a significantly smaller proportion among recipients of octogenarian grafts. These findings have important implications on organ allocation as hepatitis C virus-infected patients account for more than 50% patients on the waiting list.

Being a retrospective analysis, our study has several limitations. The study lacks data on the percentage of donors turned down or discarded in each group based on biopsy findings or other donor characteristics. The study also lacks data on the rate and type of posttransplant complications, and causes of graft loss and mortality in recipients. In addition, because the majority of older donors in this study were used after 2000, it remains possible that longer follow-ups would demonstrate a difference in graft or patient survival, or both, and could give a better analysis of the effect of recipient disease on older graft survival. Still, studies such as this remain important as the poor long-term patient and graft survival rates in recipients of older livers in earlier reports were probably because of the general attitude of allocating these livers to “marginal” recipients (like patients of advanced age, and those with high model for end-stage liver disease score, hepatitis C seropositivity, and hepatocellular carcinoma). However, in view of the ongoing shortage of deceased donor organs, older donors can be a valuable part of the liver donor pool. Additionally, careful selection and pairing with appropriate recipients can achieve acceptable results.

The potential risks and benefits associated with the use of livers from older donors must be carefully weighed. Careful donor selection, avoidance of additional donor risk factors (minimizing the cold ischemia time and avoiding grafts with moderate or severe steatosis), and a vigilant allocation (hepatitis C seronegative recipients with moderate model for end-stage liver disease score) can offer acceptable early functional recovery even for donors ≥ 80 years. In particular, pairing an old graft with an older hepatitis C virus-infected recipient should be avoided whenever possible. 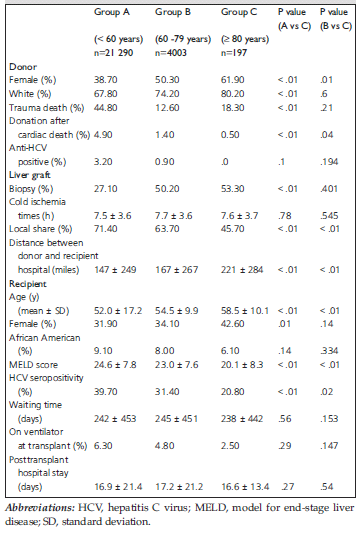 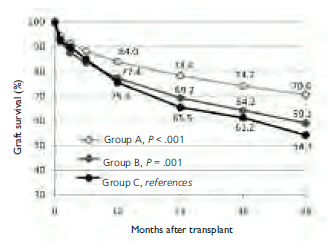 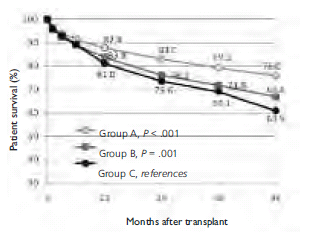