Results: A 4-year-old boy was treated with standard doses of chemotherapy containing cardiotoxic daunorubicin and mitoxantrone, and later, with an allogeneic bone marrow transplant. Twelve years after the diagnosis of acute myeloid leukemia, and following a viral infection of an unknown cause, he developed symptoms of heart failure. Severe dilated cardiomyopathy; and severe, left ventricular dysfunction with ejection fraction of 12% were noted on echocardiography. The patient required a heart transplant 19 years after the diagnosis of leukemia.

Survivors of childhood cancer have an increased risk of late cardiovascular morbidity and mortality compared with a healthy population, several years or decades after therapy. The mortality rate from cardiac cause in long-term childhood cancer survivors is 8.2 times greater than expected, and the cumulative probability of cardiac death increases 15 to 25 years after the diagnosis of cancer (1).

The risk of cardiac damage increases progressively over time and appears to be related, in part, to anthracycline chemotherapy. Risk factors that may play a role in the susceptibility for anthracycline cardiotoxicity include higher cumulative dosages, low age at the time of treatment, and longer time elapsed from diagnosis and concomitant therapy. Late cardiotoxicity may manifest spontaneously, or it may be triggered by stressors such as viral infection, surgery, isometric physical activity, somatic growth, and others (2, 3).

We report a case of 24-year-old male leukemia survivor with dilated cardiomyopathy and severe heart failure. As a 4-year-old boy, he was diagnosed with acute myeloid leukemia. Chemotherapy was initiated in September 1988, with standard, cumulative dosage of potentially cardiotoxic daunorubicin (375 mg/m2). Because of partial remission, he required subsequent intensive chemotherapy with high-dose cytosine arabinoside, and potentially cardiotoxic mitoxantrone (total cumulative dose of mitoxantrone was 99.5 mg/m2), to achieve complete remission in May 1990. In 1991, he underwent an allogeneic bone marrow transplant from HLA-identical sibling donor. Since completion of anticancer therapy, there have been no signs of relapse.

The initial cardiology examination in 1988, including echocardiography, failed to reveal any significant abnormalities. Only nonspecific repolarization changes on electrocardiogram were detected during 1990-1999.

In October 2000, 12 years after the diagnosis of acute myeloid leukemia and following a prolonged viral infection (causative agent was not identified), the patient was presented with dyspnea. The physical examination revealed signs of biventricular failure including hepatomegaly, ascites, and peripheral edema. At that time, an echocardiography revealed severe, left, ventricular systolic dysfunction with a left ventricular ejection fraction of 12%, moderate mitral insufficiency, and severely dilated cardiomyopathy. A month after therapy for his heart failure, an echocardiography showed significant improvement in left ventricular ejection fraction (40%-50%). A Holter monitor recorded bursts of nonsustained ventricular tachycardia, and episodes of atrial flutter with slow ventricular response.

An endomyocardial biopsy performed in 2003 revealed mild, diffuse fibrosis; hypertrophy of cardiomyocytes; focal injuries; and presence of histiocytes, lymphocytes, and rarely leukocytes. Structural changes of the myocardium are shown in Figure 1.

In our patient, the evidence that myocardial damage occurs as a result of anthracycline cardiotoxicity is not strong; however, there is no proof to support the hypothesis that viral infection alone caused his heart failure. The endomyocardial biopsy was performed 3 years after deterioration of his clinical condition. And the detected, myocardial, histopathologic abnormalities were consistent more with toxic cardiomyopathy than with viral myocarditis. It is reasonable that prolonged viral infection added another stress to the myocardium, which was previously altered by cardiotoxic therapy (daunorubicin, mitoxantrone, and total body irradiation, as part of the bone marrow transplant procedure). In this patient, the first nonspecific, electrocardiographic abnormalities were detected during the chemotherapy. These findings might indicate an acute myocardial damage and may increase a risk of development of late cardiotoxicity (occurring more than 1 year after diagnosis). Additional risk factor for cardiotoxicity could be the young age of our patient at the time of chemotherapy. The effects of anthracyclines in a growing organism alter heart growth potential and its compensatory ability (2, 3).

There is a paucity of literature on patients with myocardial damage after anticancer therapy that required heart transplant. Cardiac transplants in the context of anthracycline cardiotoxicity were published for the first time in the late 1980s (4, 5, 6). Ramrakha and associates reported a case of 26-year-old man with acute myeloid leukemia who was treated with potentially cardiotoxic chemotherapy and subsequent bone marrow transplant, who developed dilated cardiomyopathy, requiring a heart transplant 9 months later (7).

Steinherz and associates published 15 cases of patients who were treated with cardiotoxic agents, and developed clinical late cardiotoxicity, 6-19 years after the treatment (8). All patients but 1 presented with arrhythmias, and 1 patient died from congestive heart failure. Patients with severe heart failure underwent successful heart transplants.

Patients diagnosed with cancer today have a better chance than ever of surviving their malignancy; however, we also have learn more about the long-term adverse effects of therapy and monitor the health of survivors who were treated many years ago.

In conclusion, cardiac toxicity in childhood leukemia survivors may result in congestive heart failure or a heart transplant. 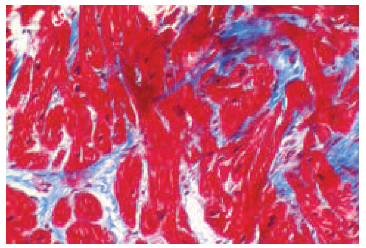 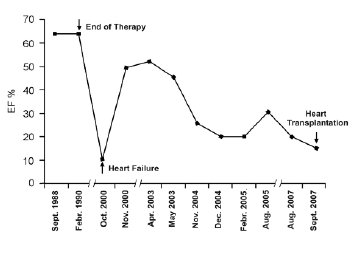