Objectives: Although the number of patients awaiting renal transplant is rapidly increasing, the donor pool has remained relatively stable. Horseshoe kidneys, a common renal fusion anomaly, can provide a useful solution to the ever-increasing gap between supply and demand.

Materials and Methods: These kidneys can be transplanted, en bloc, into a single recipient or divided and transplanted into 2 recipients.

The demand for deceased donor kidneys continues to outpace supply. Extended criteria donor kidneys, organs from high-risk donors, and organs after cardiac death exemplify attempts to maximize the donor pool. Kidneys from donors after cardiac death and extended-criteria now represent 33% of all kidneys recovered (1) and could substantially increase the donor pool if used more effectively. Transplanting of horseshoe kidneys may represent another opportunity. However, its use has been documented only sporadically.

The horseshoe kidney is among the most-common of renal anatomic variations. The incidence ranges from 1 per 600-800 adults worldwide. It occurs more commonly in men than women, arising during weeks 4 to 6 of gestation by fusion of the metanephrogenic caps. It frequently contains vascular and ureteral abnormalities in addition to its fusion at the isthmus (2, 3). The isthmus connecting the lower poles may be a fibrous band, or it may contain functional parenchyma, and it is rarely, if ever, crossed by the collecting system. The vascular anatomy of the horseshoe kidney is usually complex, often involving multiple renal veins directly from the kidney as branches from the veins. The renal arteries also show great variation, with only a third of all horseshoe kidneys containing a single renal artery per side (4).

In 1522, De Carpi was the first to document a case of a horseshoe kidney (5). In the beginning of the 20th century, the frequency and clinical relevance finally became known (6). VA Politano was credited as the first person to transplant a horseshoe kidney in 1963, although this was not published (7). The kidney functioned well, but the recipient died 8 months later of hepatitis.

Horseshoe kidneys can be transplanted into a single recipient en bloc, or into 2 patients after division of the renal isthmus. Many case studies have reported technical as well as long-term effectiveness with transplant of horseshoe kidneys. No reviews, however, have been published since 2001 (8). Importantly, the use of horseshoe kidneys is not tracked by the United Network for Organ Sharing (UNOS) nor the Scientific Registry of Transplant Recipients (SRTR) databases. The purpose of this report is to provide 2 examples of successful horseshoe kidney transplants, as well as an analysis of all published cases in the literature.

A 40-year-old man, with a past medical history of hypertension, died of a gunshot wound to the head. He had no known history of urinary tract infections, kidney stones, or congenital defects. Creatinine was 88.4 µmol/L (1.0 mg/dL). At the time of death, a horseshoe kidney was identified. Vascular anatomy consisted of 4 renal arteries (1 on the left and 3 on the right), 3 renal veins (1 on the left and 2 on the right), and normal ureters and collecting systems, bilaterally. The isthmus consisted of a broad band of apparently functioning kidney tissue.

The recipient was a 63-year-old woman with end-stage renal failure, secondary to diabetes mellitus and hypertension. She had been on hemodialysis for 2 years before surgery.

On the back table, after a cold ischemia time of 14 hours, the donor kidney had irreparable damage to the right kidney’s collecting duct from the procurement (Figure 1), so the kidney was divided at the isthmus (Figure 2). After separation, the left kidney, which had normal anatomy of 1 artery, 1 vein, and a single, functional ureter, was transplanted without complication (Figure 3). The raw surface was argon-beam coagulated and sealed with fibrin glue.

Her immunosuppression consisted of induction with antithymocyte globulin (rabbit) at 5 mg/kg, tacrolimus, mycophenolate mofetil, and prednisone. She received 1 hemodialysis treatment for hyper-kalemia, and 12 days after surgery, had a creatinine level of 265.2 µmol/L (3.0 mg/dL) and adequate urinary output. At 9 months’ follow-up, her creatinine level was 97.2 µmol/L (1.1 mg/dL) (Figure 4).

The second case involved a 51-year-old male donor who donated a horseshoe kidney after death from suicide. At the time of admission, his serum creatinine was 141.4 µmol/L (1.6 mg/dL), and he had good urine volume.

The recipient was a 43-year-old woman, with end-stage renal disease due to diabetes mellitus and hypertension. She was on maintenance hemodialysis from September 2005 until the time of surgery.

Her immunosuppression consisted of basiliximab, tacrolimus, and mycophenolic acid. She required 1 round of dialysis after surgery for hyperkalemia. She is currently doing well, with a continually falling creatinine of 194.4 µmol/L (2.2 mg/dL) at 5 months follow-up.

Fifteen horseshoe kidneys were transplanted en bloc into 15 recipients. Of the 34 horseshoe kidneys divided and transplanted into 50 recipients, 15 recipients received en bloc kidney (44%), and 19 received a split kidney (56%). The average age of the recipients and donors was 44.3 years (range, 7-69 years) and 34.4 years (range, 3-65 years). Average cold ischemic time was 24.4 hours, (range, 3-46 hours). Nine grafts (18%) (2 en bloc and 7 split) experienced primary nonfunction at follow-up. Forty-one transplanted kidney allografts (82%) demonstrated good function at a median follow-up of 6 months. There were 2 recipient deaths. Twenty-one recipients (42%) were followed for at least 1 year after the transplant, all were reported to have good kidney function. Despite the high incidence of complex vascular anomalies, there was only 1 case (2%) of intraoperative vascular thrombosis.

The number of patients awaiting a transplant continues to rise. As of April 2009, there were 75 000 wait list candidates on UNOS. Organs previously deemed unacceptable for transplant are being used with increased regularity, exposing surgeons to new technical and ethical challenges (8, 32, 37). Horseshoe kidneys represent 1 of these challenges. Case reports have been published on techniques and outcomes. Almost all of them have reported good results, if careful attention is paid to the anatomic variations. For example, renal vessels often originate from the iliac arteries and veins, while the renal isthmus can have an independent blood supply. Attempts have been made to classify the vascular anatomy, (38, 39) but the complexity has made this challenging. Results from transplanted horseshoe kidneys appear to be similar to those of nonhorseshoe kidneys. However, there may be a reporting bias.

In addition to a complex anatomy, horseshoe kidneys pose another obstacle to widespread acceptance. Neither UNOS nor SRTR has specific data on horseshoe kidneys in their databases. Several literature reviews have been published, with several European studies, but the majority of publications are only letters or case reports, which make it challenging to obtain clinically relevant data. It is possible that the lack of experience and knowledge may have lead to the discarding of the second kidney in donors after cardiac death. We recommend that horseshoe kidney transplants be included in the database in the hope that transplant surgeons will become more comfortable with their use. 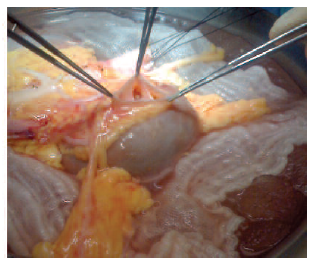 Figure 1. Damaged collecting duct in the discarded half of the horseshoe kidney. 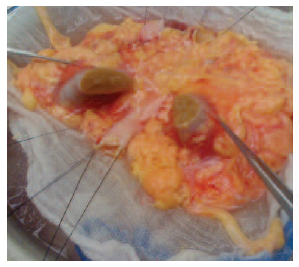 Figure 2. Horseshoe kidney after division at the backtable. 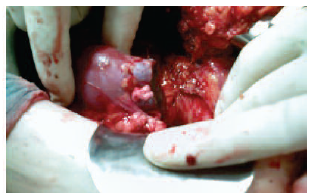 Figure 3. Horseshoe kidney after implantation into the recipient. 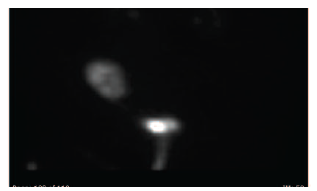 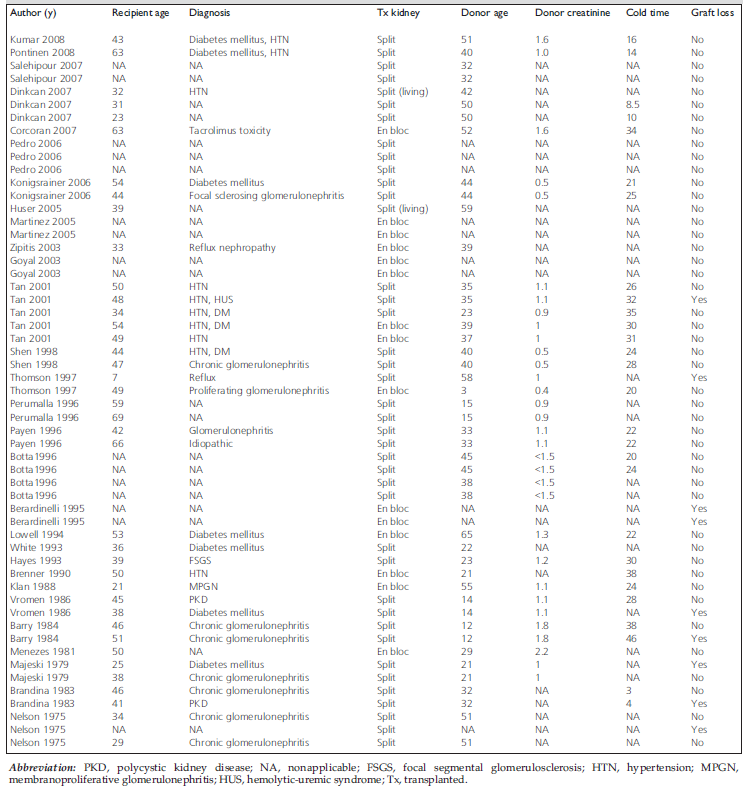