Objectives: Our purpose was to investigate the effects of ischemia-reperfusion injury on traumatized lungs.

Materials and Methods: Twenty-four Wistar rats were used in the study. Rats were randomly divided into 4 groups. In the control group (group 1), only anesthesia and ventilation were used. In group 2, only lung ischemia-reperfusion injury was instituted. In group 3, only blunt chest trauma was instituted. And in group 4, lung ischemia-reperfusion injury, consisting of 24 hours after the constitution of blunt chest trauma, was used. Lung damage and systemic inflammation parameters were evaluated.

Results: All parameters (alveolar degeneration grades, alveolar macrophage and lymphocyte counts, antioxidant enzyme activities, cytokine levels, and bronchoalveolar lavage fluid albumin level) were higher in all groups than they were in the control group (P < .05). Only tissue malondial­dehyde, tissue interleukin-8, and serum glutathione peroxidase levels were significantly higher in the lung ischemia-reperfusion group than they were in the trauma group (P < .05). The trauma + ischemia-reperfusion group showed no significant difference when compared with the only ischemia-reperfusion or only trauma groups in any parameters (P > .05).

Conclusions: The findings showed that lung trauma does not aggravate the deleterious effects of lung ischemia-reperfusion injury.

It is not ideal, but traumatized lungs have sometimes been implanted to recipients because of the shortage of donor lung availability. Logically, in such cases, with compared with nontraumatized patients, poorer results would be expected. However, some data show that outcomes are not significantly different between traumatized and nontraumatized donors (1). So far, this issue has not been clearly investigated.

Animals
Twenty-four male Wistar rats weighing 280-320 g were used. The study was approved by local ethics committee and financially supported by the scientific research board of the university. All animals received humane care in compliance with the “Guide for the Care and Use of Laboratory Animals,” prepared by the Institute of Laboratory Animal Resources (2).


Constitution of lung trauma
Rats were anesthetized with 30 mg/kg thiopentone ip (pental sodyum, IE Ulagay, Istanbul, Turkey). The experimental lung contusion model described by Raghavendran and associates (3) was done to create a lung contusion with a special setup. Briefly, a 500-g, iron, cylindrical weight was dropped from 50 cm onto the chest. Approximately 2.45 joule of impact energy was achieved according to the formula, E=mgh, where “m” is the mass of cylinder (in kilograms), “g” is gravitational acceleration (9.8 m/s2), “h” is the height of the weight above the platform (in meters).

Constitution of the lung ischemia-reperfusion injury
Rats were anesthetized with 50 mg/kg thiopentone ip, and left hemithorax was shaved. Animals were intubated by tracheostomy and connected to a rodent ventilator (Harvard instrument, ASVP, USA). Animals were ventilated with room air (10-cm H2O peak inspiratory pressure, 4-cm H2O positive end expiratory pressure, 60 breaths/min frequency). Atropine 0.4 mg IM was given. A left, dorsolateral, thoracotomy, in the fourth intercostal space was performed. The left lung was mobilized atraumatically, and the mediastinum was dissected around the left lung hilus. Fifty units heparin was given via the penile vein. Five minutes later, animals underwent 2 h of warm lung ischemia by clamping the bronchus, pulmonary artery, and veins of the left lung in an inflated state, using a microvascular clamp. During the operation, the left hemithorax was covered by a moist tissue to minimize evaporative loss. After 2 hours of ischemia, the clamp was removed, and reperfusion was allowed. At the end of 3 hours of reperfusion, a laparosternotomy was performed. Two- to 4-mL blood samples were taken, and then the inferior vena cava and right and left atrial appendages were cut. The lung was flushed through pulmonary artery, with a 20-mL saline solution, at 20-cm H2O pressure. The lung-heart block was removed, and bronchoalveolar lavage fluid was taken from the left lung. One half of left lung was kept in -80°C for biochemistry, and the remainder was kept in a 10%-formalin solution for histomorphometric studies.

Preparation of lung tissue homogenate
Lung tissues were stored at -80°C until analysis. After the lung tissues had been weighed, they were homogenized in 5 volumes of ice-cold tris-HCl buffer (50 mM, pH 7.4) containing 0.50 mL/L of Triton X-100. Homogenization was performed for 2 minutes at 13 000 rpm with an Ultra-Turrax T25 basic (IKA, Staufen, Germany). All procedures were performed at 4°C. Homogenate, supernatant, and extracted samples were prepared, and the following analyses were performed on the samples with commercial chemicals supplied by Sigma (St. Louis, MI, USA).

Histomorphometry
Lung tissue samples were kept in 10%-formalin solution and embedded in paraffin blocks. All specimens were sampled with 4-µm serial cuts (Leica SM 2000, Germany) and dyed with hematoxylin and eosin. The sections were evaluated under the light microscope (Leica DM 4000 B and Leica DFC 280 Plus camera; Weetlar, Germany) by a histologist who was blinded to the study. Alveolar degeneration (differences in infiltration, terminal bronchial wall structure, the terminal bronchial debris, respiratory bronchial wall structure, respiratory bronchial debris, alveolar structure, and edema in vascular wall) were evaluated using semiquantitative scores between 0 and 5 (0, no changes; 1, focal slight changes; 2, multifocal slight changes; 3, multifocal significant changes; 4, diffuse light changes; 5, diffuse significant changes). Cells were counted in 10 sections of each sample, and were randomly chosen from 10 different areas, using × 400 magnification. Photos taken with the Leica Q Win V3 Plus Image program were used for counting. Lymphocytes were detected with a dark, round nucleus, and a narrow cytoplasmic area around their nucleus. Free macrophages were counted in alveolar and bronchial spaces.

Antioxidant enzyme activities and lipid peroxidation
Superoxide dismutase, glutathione peroxidase activities, and malondialdehyde levels were studied in serum and lung tissue homogenate. Total (Cu–Zn) superoxide dismutase (EC 1.15.1.1) activity was determined according to the method of Sun and associates (5). The superoxide dismutase activity is expressed as unit per gram protein. Glutathione peroxidase activity was measured by the method of Paglia and associates (6). Activity is expressed as unit per gram protein. The tissue thiobarbituric acid-reactive substance level was determined by a method (7) based on reaction with thiobarbituric acid at 90-100°C. Results are expressed as nmol per gram wet tissue, according to the standard graphic, prepared from measurements with a standard solution (1,1,3,3-tetramethoxypropane).

Statistics
Statistical analyses were performed with SPSS software for Windows (Statistical Product and Service Solutions, version 15.0, SSPS Inc, Chicago, IL, USA). Data were expressed as mean ± standard deviation (SD). Kruskal-Wallis and 1-way ANOVA were used for nonparametric and parametric comparisons among the groups. Post hoc multiple comparisons were calculated with Mann-Whitney U and Tukey tests. A P value less than .05 was accepted as statistically significant.

It is well-known that trauma is a source of stress and causes an inflammatory response. Animal lung contusion studies showed that leukocyte activation and infiltration, inflammatory cytokine and chemokine levels, and oxidative stress parameters increased after lung traumas. Trauma activates some immune cells also (8-10).

Preconditioning is a defense mechanism rendering an organism more resistant to severe stress. First recognized by Murry (11) as ischemic preconditioning, many forms of preconditioning have been defined, such as thermal, pharmacologic, gas inhalation, and toxic (12-14). The protective mechanism of preconditioning has not exactly been lightened. Activation of some cell membrane (adenosine, α-adrenergic, bradykinin, and opioid receptors), administration of endogenous triggers (free radicals, nitric oxide, calcium), activation of intracellular signaling pathway (protein kinase C, tyrosine kinase, mitogen-activated protein kinase), and affecting, related, end effectors (metabolism, protein synthesis, K-ATP channels, Na-K pump, cytoskeleton) have been reported as investigated mechanisms (13). We suggest that a traumatic stress can activate all of these mechanisms, and in our study, lung trauma triggered one or more mechanisms mentioned above. In addition, tissue ischemia, developing after lung contusion, also may have contributed to consist of an ischemic preconditioning process in the lungs.

Actually, it has been anticipated that transplanting of a traumatized donor lung results in a greater number of early and late postoperative complications, but this topic has never been particularly investigated (15). In contrast, many authors reported that there was no significantly difference in early posttransplant outcomes, mortality, and survival between traumatized and nontraumatized donors (1, 15-17). These papers may support the data of our study; however, none of these papers was prospectively designed for isolated traumatized lungs, and multiple factors such as brain death, immunity, treatment options, and others may have affected the outcomes.

Our study was designed to show only the effects of ischemia-reperfusion on the traumatized lung, but not to show the effects of immunity and other factors. Some limitations are present in our study. First, the study was not experienced in a transplant model. So, the results may not reflect clinical outcomes. Second, the effects of brain death were not included in this study. Third, preoperative, and postlung functions and oxygenation were not studied. We did not know how rats were physiologically influenced from the procedures. Subsequently, our study did not answer the question of whether we could safely use a traumatized donor lung in a transplant or not. Further studies are needed for certain recommendations.

In conclusion, lung trauma does not significantly aggravate the deleterious effects of ischemia-reperfusion on the lungs. Stress preconditioning mechanisms may contribute to this condition. 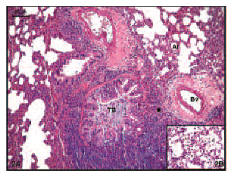 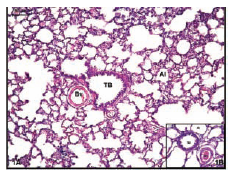 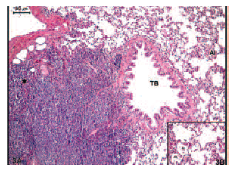 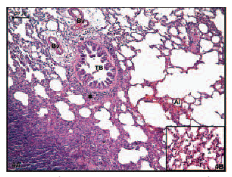 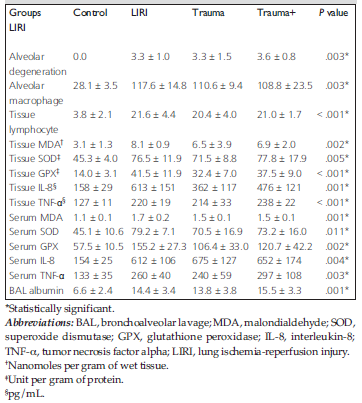 Table 1. Statistical comparison of all groups. 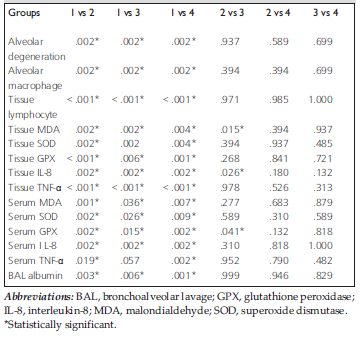