Objectives: Alpha 1 antitrypsin (A1A) is a 52 kD glycoprotein that is mainly synthesized in the liver. As a major protease inhibitor, it binds to and neutralizes neutrophil elastase, thereby limiting the damage to the normal tissues after an inflammatory response.

A deficiency in A1A leads to end-stage liver disease, both in children and in adults. In addition, the deficiency also has a detrimental effect in the lungs of the adult population. Alpha 1 antitrypsin deficiency is corrected with hepatic replacement; however, the changes in pulmonary functions have not been studied before and after liver transplant.

The purpose of this study was to observe the changes in the pulmonary functions of patients who underwent liver transplant for the treatment of A1A deficiency.

Conclusions: It appears from the results of our study that liver transplant probably prevented the progression of pulmonary disease in A1A-deficient patients. Further study and close, postliver, transplant follow-up is warranted to support our initial findings.

Alpha 1 antitrypsin (A1A) is a 52 kD glycoprotein that is mainly synthesized in the liver. Being a major protease inhibitor, it promotes the degradation of serine proteases, mainly neutrophil elastase, thereby limiting the damage to the normal tissues after an inflammatory response. Different alleles have been identified on chromosome 14 on which the gene for A1A is located (1-3). A deficiency in A1A affects 2 vital organs, the liver and the lungs, by distinctly different mechanisms (2, 4). Liver disease transpires by the deposition of globules in the hepatocytes, thereby inducing cirrhosis in early childhood or later, in the fourth or the fifth decade of life (1-3, 5-9). Destruction of alveoli within the lungs results in obstructive airway disease, with emphysematous changes manifesting in the fifth or the sixth decade of life (1, 2, 10).

Between May 1999 and June 2003, 9 patients (7 men, 2 women) with known A1A deficiency underwent a liver transplant at our institution. One patient (case No. 1) received a live-donor liver transplant, while the remaining 8 patients received a deceased-donor liver transplant. Pulmonary function tests were conducted preoperatively for all 9 patients. All values are presented as the mean ± standard deviation (Table 1). For patient and graft survival analysis, Kaplan Meier estimates were done using SPSS software for Windows (Statistical Product and Service Solutions, version 16.0, SSPS Inc, Chicago, IL, USA).

Patient survival
All 7 patients, whose follow-up was available, were alive at the time of their last follow-up, yielding a 100% survival rate from 43.3 to 111.6 months (Figure 1).

Graft survival
One patient (case No. 2) underwent 2 retransplants, 5 months and 12 months after the initial liver transplant, owing to delayed, hepatic artery thrombosis on both occasions. He is alive 6 years after the second retransplant with an overall graft survival of 85.3% at 9 years (Figure 1).

We then compared the impact of ascites, pleural effusion, and smoking with changes in pulmonary function tests (Table 4).

Effect of ascites/pleural effusion
Ascites was found in 4 out of 7 patients, roughly 57% (cases Nos. 3, 4, 5, and 6) of the before-liver transplant, whereas 1 patient (case No. 6) was found to have both ascites and pleural effusion after the liver transplant (Table 4). Of these 4 patients, half (case Nos. 3 and 4) demonstrated improvement, while the remaining 2 patients (case Nos. 5 and 6) experienced deterioration in FEV1.

During the last follow-up, liver function, renal function, and immunosuppression tests were conducted, the results of which are shown in Table 3. Stable liver and satisfactory renal functions were seen in the majority of all the patients. All patients in this series are undergoing monotherapy with calcineurine inhibitor, with the exception of case No. 6, who is on 5 mg daily prednisolone.

Alpha 1 antitrypsin deficiency leading to end-stage liver disease both in children and in adults is well-described in the literature; currently, liver transplant remains the only option for the failing liver in this subset of patients (9, 18, 19, 21-23). However, while successful liver transplant restores the A1A serum levels, the genetic defect continues (1, 9).

Liver disease due to A1A deficiency can affect in early childhood and the middle-aged population, while lung involvement appears to occur solely among middle-aged individuals. The pulmonary component of this condition is unknown or is not reported in the childhood population (10). Several reports exist on postliver transplant survival outcomes of patients with A1A deficiency. Kemmer and associates (19) described 567 cases from the UNOS database who received liver transplants in response to A1A deficiency, while Vennarecci (9) reported 35 cases (13 children, 22 adults). Albeit in these publications, no attempts were made to study the pulmonary functions in the postliver transplant period.

The registry of the patients with severe deficiency of A1A, an NHLB1-sponsored multicenter study of over 1129 patients, found an annual FEV1 decline of 54 mL/year based on high-quality, sequential, pulmonary function measurements (24). The rate of decline among the participants who were not receiving augmentation therapy was higher (84 mL/year) with FEV1 between 50% and 79% of the predicted value. Seven patients we described are in the latter group. For these 7 patients, the time interval between before liver and after liver transplant spirometry averaged 35.9 months, or almost 3 years. One would expect these untreated patients to have a reduction of FEV1 by 84 mL/year, which would represent a loss of 251.3 mL over this time. The fact that these 7 patients had no further deterioration of FEV1, as determined by pulmonary function tests over a period of 3 years, is quite remarkable. When we examined the factors that could potentially affect the pulmonary function tests in our population, in terms of presence of ascites and/or pleural effusion, there was no clear relation in the study population. However, one would imagine that with the improvement in ascites and/or pleural effusion after the liver transplant, there would be some improvement in overall pulmonary function tests. In addition, when we compared these 2 patients who had discontinued smoking after the liver transplant with the other 2 patients who reduced the amount of smoking, we noted mixed results, which were similar to those patients who never smoked.

On the individual basis, 1 patient (case No. 4; age, 36 years) who was the youngest in the series, had 43.8% improvement in FEV1 at 45.5 months after the liver transplant, whereas the oldest patient in the series (case No. 5; age, 58.8 years), who was a nonsmoker, had the largest deterioration in FEV1 at 41.6 months after the liver transplant. This is most likely a coincidental observation, but it makes one think whether the patient’s age could be a factor in improvement. If liver transplant is performed early, the damage to the lung may be reversible when compared with when it is performed at a later stage in life, when the damage has established permanency. Such dramatic changes may be mechanical in nature (ie, related to ascites or other factors); however, this did not have any expected improvement.

In case No. 3 (age, 49.5 years), sequential pulmonary function tests at 4 time points after the liver transplant showed a stable FEV1 from 12 to 59 months after the liver transplant period. Although only abnormal Protease inhibitor alleles ZZ is associated with the disease, it is well-known that there are several different alleles that are responsible for A1A production (1-3). The possibility exists that there may be genetic differences between those with predominant lung disease and others with predominant liver disease.

Alpha 1 antitrypsin-deficient individuals who escape severe liver disease in childhood, generally are free of clinical liver disease until later in life. From age 20-40, the incidence of liver disease in the A1A-deficient population is 2%. Between 41-50 years of age, the incidence increases to approximately 5%, which increases further to 15% in the age group 51 to 60 years (2). A1A augmentation therapy slows the annual decline in FEV1 in patients with severe hereditary A1A deficiency (3, 11-17, 25), whereas no such benefits of A1A infusion on the liver component are presently known (1-3). It may be possible that the effectiveness of restoring A1A ± serum concentration by liver transplant may not be as significant in improving lung disease compared with liver disease due to differences in genetic composition. The literature comparing the pulmonary functions of patients with A1A deficiency before and after liver transplant has yet to be reported. Although the number of patients is smaller in the present study, these findings suggest that augmentation of A1A levels, via a liver transplant, stabilizes lung function, as was observed in the patients documented in the A1A infusion registry (14).

Certainly, further longitudinal studies with frequent monitoring of pulmonary function tests after the liver transplant may provide us with a more concise picture.

Liver transplant remains the only option for liver failure in patients with A1A deficiency by providing substantial, long-term survival. Most importantly, this modality can only be expected to arrest the pulmonary deterioration resulting from A1A deficiency without reversing the damage to the lungs already caused by the disease. 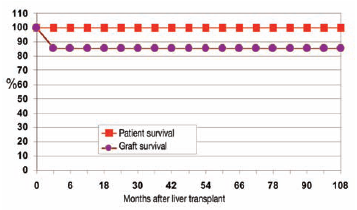 Figure 1. Patient and graft survival, inmonths, after the liver transplant. 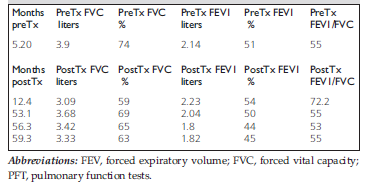 Table 4. Comparison of change of FEV1 in preLTx and postLTx and factors influencing it.