Materials and Methods: Nineteen patients who underwent a renal transplant were included. All were on cyclosporine-based immunosuppression. Plasma levels of malondialdehyde, ferric reducing activity, hepatocyte growth factor, vitamin E, erythrocyte glutathione, and superoxide dismutase activities were determined before, and on the second, seventh, and 12th days after the transplant.

Conclusions: Renal transplant recipients display persistent oxidative stress during the early phase of transplant. The pattern of oxidative changes should be considered for appropriate time, dosage, type, and the duration of antioxidant therapy in these patients.

Ischemia-reperfusion accompanied during renal transplant induces oxidative stress (1). Although there are improvements in metabolic disturbances after a renal transplant, but the oxidative status during and after transplant is not completely understood (2). Previous studies have reported the measurements of serum antioxidant levels following transplant. Some studies demonstrated increased activities of enzymatic antioxidants (2, 3), while other studies reported a decrease in enzymatic and nonenzymatic antioxidant defense mechanisms (4-6). In some cases, antioxidant activities did not show any alteration (7). Because these studies used different experimental conditions, it is plausible that these varying experimental conditions were responsible for the inconsistent results. It should also be noted that measurement of the total antioxidant capacity in biological samples would allow detection of the contribution of still unknown antioxidants, and the synergism between antioxidants (8-10).

Understanding the pattern of oxidative changes after transplant will lead to clinical strategies to combat oxidative injuries. Therefore, in this study, the pattern of changes in plasma oxidative status was evaluated by measurement of erythrocyte glutathione (reduced glutathione), superoxide dismutase activity, plasma malondialdehyde, ferric reducing activity of plasma, and vitamin E before the transplant, and after including the second, seventh, and 12th days in living-donor kidney transplant recipients.

All patients were on cyclosporine-based immunosuppression with normal graft function; mean plasma creatinine was 123.76 ± 27.4 µmol/L. Diabetics, patients with dehydration, ischemic or infectious complications, multiorgan transplants, those with a history of earlier renal transplant, and patients treated with vitamin supplements were excluded. Recipient body mass index was abstracted from height and weight recorded at the time of transplant or registration.

Blood samples (4 mL) were obtained before the transplant, and then on the second, seventh, and 12th days after the transplant. Samples were collected from fasting patients in heparinized tubes and were centrifuged (3000 g at 0-4°C for 8 min). The plasma was removed, aliquoted, and stored at -70°C. None of the patients required dialysis during the posttransplant course of the study. Because anemia is a driving factor for increased oxidative stress, hemoglobin levels were measured during each sampling, and the values of glutathione and superoxide dismutase were expressed as U/g Hb.

A control group of 20 healthy, nonsmoking volunteers was matched for age and sex with the patients. They were recruited among the medical and research staff. The study protocol was approved by the medical ethics committee of Tehran University of Medical Sciences; written, informed consent was obtained from the patients and conforms with the ethical guidelines of the 1975 Helsinki Declaration. The characteristics and clinical data of the patients are summarized in Table 1.

Measurement of erythrocyte glutathione
Reduced glutathione was assayed according to the Tietz method in fresh, heparinized, whole blood samples. First, 200 µL of whole blood was mixed with the precipitating solution and after adding DTNB solution (5, 5’-Dithiobis 2-nitrobenzoic acid), its continuous reduction was measured at 412 nm. The value for each sample extracted from the standard curve is expressed as g/g Hb (16).

Measurement of plasma malondialdehyde
Malondialdehyde was measured in fresh plasma samples according to the method of Esterbauer and Cheeseman (18). Malondialdehyde reacts with thiobarbituric acid and produces a pink pigment, which has a maximum absorption at 532 nm. The value of each sample was expressed as µmol/L.

Measurement of plasma vitamin E
Plasma vitamin E levels were measured using reversed-phase high-performance liquid chromatography (HPLC) and ultraviolet (UV) detection. Vitamin E extraction was done according to Arnaud (19). First, 100 µL of ethanol-butylated hydroxy toluene and α-tocopherol acetate (50 µM; Sigma/Aldrich, Germany) were added to 200 µL of plasma samples. Samples centrifuged at 7000 g for 5 minutes and dried under nitrogen gas. The residue was redissolved in 200 µL of mobile phase (methanol) by mixing for 2 minutes, and 50 µL were immediately injected into the chromatograph.

Statistical analysis
Results are expressed as the mean ± SEM. The data were analyzed by the Kruskal-Wallis test; when the analysis showed significant differences among groups, means were compared with the Mann-Whitney U test. Pearson correlation coefficient was used to determine association between the changes in hepatocyte growth factor and oxidative variables. The null hypothesis was rejected at the .05 level of significance. Statistical analyses were performed with SPSS software for Windows (Statistical Product and Service Solutions, version 11.0, SSPS Inc, Chicago, IL, USA).

Biochemical measurements
Plasma levels of urea nitrogen and creatinine improved significantly in all patients, notable within first week after renal transplant (P < .05 for all, data not shown). Some of these data are summarized in Table 1.

In this study, we evaluated plasma hepatocyte growth factor changes in parallel with total plasma antioxidant capacity, as well as single antioxidants, in about 2 weeks. The patients showed an oxidative stress before transplant that was demonstrated by higher malondialdehyde and lower superoxide dismutase activity when compared with healthy subjects. Almost, the same results were seen 48 hours after transplant. The lower superoxide dismutase value in patients is indicative of oxidative stress, which is present in end-stage renal disease. Davenport and associates (21) reported that the superoxide dismutase levels decreased in patients who had just received a transplant and received cyclosporine.

Fernandez and associates (3) and Dasgupta and associates (22) have also reported that kidney patients who underwent a renal transplant showed higher malondialdehyde levels compared with a control group. This agrees with the findings of the present study. A significant reduction of malondialdehyde levels and a recovery of plasma vitamin E level on the seventh and 12th days after transplant suggest an improvement in antioxidant defense system compared with the before transplant data. In our study, the level of glutathione did not change significantly throughout the study. This agrees with the Zachara and associates (23) study. They showed no significant changes of red blood cell glutathione level after transplant. In the present study, recovery of plasma vitamin E level was detected after 1 week. One explanation may be a possible vitamin E mobilization from organs such as the liver in response to oxidative stress, as reported by Elsayed and associates (24).

In the present study, low superoxide dismutase levels throughout the study indicate a persistent oxidative stress that suggests the need for a specific or suitable antioxidant therapy in these patients. However, antioxidant supplementation may affect adequacy of immunosuppression that was reported by Blackhall and associates (30). In most cases, antioxidant is administered before measuring the patient’s needs, and its effects are not monitored. Choosing an appropriate antioxidant is important. Because a low superoxide dismutase level persists after 12 days posttransplant, a superoxide dismutase mimetic may have beneficial effect than other antioxidants. There also have been reports of a pro-oxidant effect of prolonged supplementation of vitamins (31). Therefore, the duration of antioxidant therapy is another factor that should be considered.

For a conclusion about a possible relation between hepatocyte growth factor and redox status of these patients, more-extensive studies must be performed. However, these results suggest persistent oxidative stress in these patients. The pattern of oxidative changes should be considered for appropriate time, dosage, type, and the duration of antioxidant therapy in these patients. 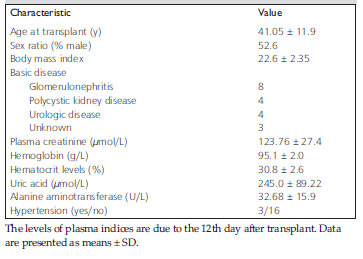 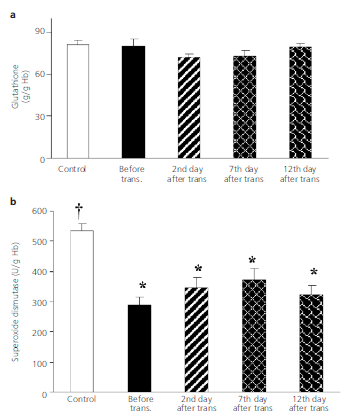 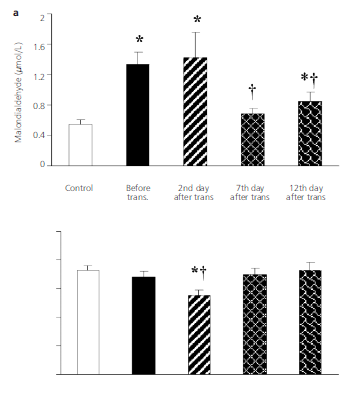 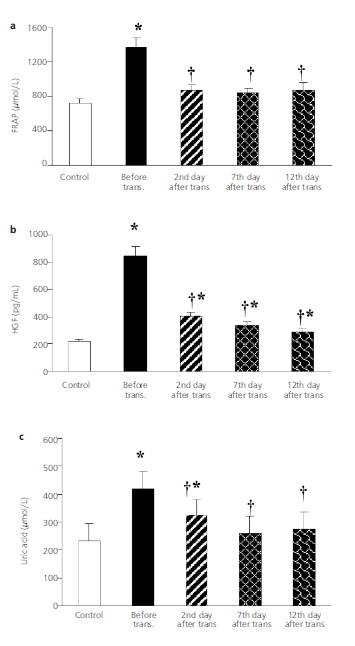 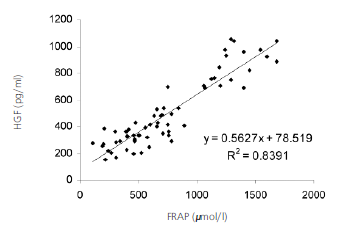