Conversion of Cyclosporine to Sirolimus Before 12 Months is Associated With Marked Improvement in Renal Function and Low Proteinuria in a South African Renal Transplant Population
Suman Maharaj, Alain Guy Assounga

Objectives: Avoidance of calcineurin inhibitor-associated nephrotoxicity has recently gained focus. To assess the impact of the conversion to sirolimus, we performed a retrospective audit on renal transplant patients switched to sirolimus at the Inkosi Albert Luthuli Central Hospital (South Africa) from 2003 until June 2007.

Materials and Methods: Medical records of transplant recipients were analyzed. Twenty-four–hour urine protein excretion and estimated glomerular filtration rates before initiation of sirolimus (baseline), and at their last clinic visit, were compared. Patients were then subcategorized according to their specific indications for switching to sirolimus.

Conclusions: Overall, sirolimus therapy was associated with improved estimated glomerular filtration rate, and also an increase in urine protein excretion rates. Maximum benefit was achieved when patients were switched to sirolimus within the first transplant year.

Sirolimus, an mTOR inhibitor, offers that opportunity. We switched several of our patients to sirolimus. Recent studies have revealed an improvement in renal function after a switch from calcineurin inhibitors to sirolimus (1, 2). However, de novo use of sirolimus in new transplants has been associated with an increased incidence of acute rejection (3).

In this retrospective study, we aimed to assess the efficacy and complications related to the use of sirolimus in renal transplant patients at the Inkosi Albert Luthuli Central Hospital. Sirolimus was introduced as a switch systematically after 3 months, or after a diagnosis of calcineurin-associated nephropathy, or other indications including posttransplant diabetes mellitus and malignancy.

Sirolimus was first introduced as an alternate immunosuppressant in renal transplant. It was shown to be effective and nonnephrotoxic, when compared with cyclosporine in the context of either azathioprine or mycophenolate mofetil (3, 4). A short while later, both sirolimus and everolimus were associated with an increase in calcineurin-inhibitor nephrotoxicity due to the inhibition of p-glycoprotein, leading to intrarenal accumulation of cyclosporine (2, 5, 6).

In a hemodynamic study, Dieckman and associates reported that cyclosporine withdrawal is associated with afferent arteriolar vasodilatation and an increase in glomerular hydrostatic pressure, leading to hyperfiltration that may result in glomerular proteinuria (5). Currently, experimental and clinical evidence reveals that hyperlipidemia may be associated with the induction or progression of proteinuria (7, 8). Sirolimus-induced hyper­lipidemia may be causative. Rapamycin causes cell cycle arrest; not only in B lymphocytes and T lymphocytes (preventing acute rejection), but also in endothelial mesangial tubular cells (9, 10). Evidence also exists that in renal tissue injury, sirolimus may inhibit tubular cell proliferation and promote their apoptosis (11). This indicates a possible tubular origin for the proteinuria as well.

Patients
Medical records from all renal allograft recipients receiving sirolimus-based immunosuppression, treated from December 2002 to June 2007, were included and reviewed. There were 22 men and 8 women; 8 patients were black, 16 were Indians, 5 were white, and 1 was colored (mixed race). In a further analysis, patients were subcategorized based on (1) specific indication for conversion to sirolimus-based therapy; (2) duration of prior calcineurin inhibitor exposure; and (3) data on the use of angiotensin-converting enzyme inhibitor and angiotensin receptor blockers were collected.

Methods
This is a retrospective analysis of renal function and proteinuria of renal transplant patients attending the Inkosi Albert Luthuli Central Hospital in Durban, South Africa.

Assessment of the evolution of renal function
Serum creatinine was measured with a well-established method the alkaline picrate method, using a Siemens machine (Siemens, Erlangen, Germany) (12). The estimated glomerular filtration rates were calculated using the Modification of Diet in Renal Disease study equation and recorded (13). Assessment was done before and after conversion to sirolimus and at the last clinic visit within the study period.

Statistical analysis
Graphpad Instat 3 software (San Diego, CA, USA) was used to make the calculations, and to compare results of various groups of patients. Values before and after conversion were compared using a Wilcoxon signed rank test. For unpaired data, the Mann-Whitney U test was used. Values for P < .05 were considered to be statistically significant.

Overall results
Thirty-three patients received sirolimus during the study period. Three patients were excluded because of drug discontinuation, 1 for a rapid decline in renal function, 1 for interstitial lung disease, and 1 for severe electrolyte disturbances that resolved after discontinuation of sirolimus. Thirty patients were included. The mean follow-up was 25.4 ± 2.7 months. The distribution of patients according to kidney source was 17 living-related kidney transplants, 10 deceased-donor transplants, and 3 living-unrelated donor transplants. The average duration of calcineurin inhibitor exposure was 47.7 ± 8.3 months (cyclosporine, n=26; tacrolimus, n=4).

Subgroup analysis
The most-favorable response to sirolimus conversion was obtained in groups of patients transferred because of cyclosporine biochemical toxicity or tacrolimus-induced posttransplant diabetes mellitus. On combining groups 1 and 4 above, 80% of patients (n=10) were converted 1 year after the transplant (ie, < 1 year of calcineurin inhibitor exposure) (Table 1). 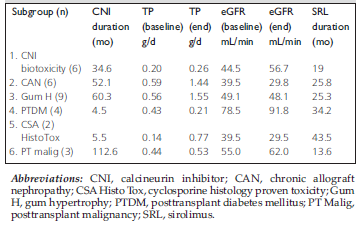 Table 2. Comparison of protein excretion and estimated glomerular filtration rate according to timing of conversion to sirolimus. 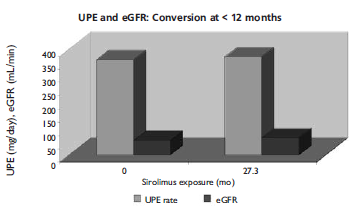 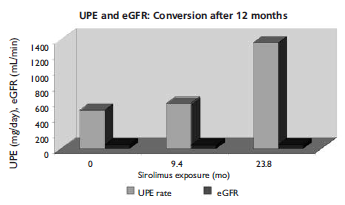 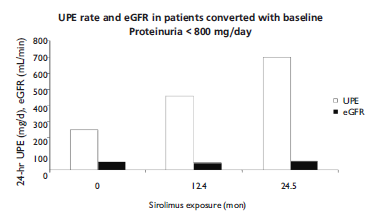