Fulminant hepatic failure is a rapidly progressive and often fatal syndrome affecting patients with previously healthy livers. It is not a common condition but represents 9% of all transplantations in Europe and 12% in the Nordic countries as one of the major indications for liver transplantation [1]. The clinical presentation varies widely and is usually complicated by cerebral edema, renal impairment, sepsis, and multiorgan failure.

Liver transplantation has dramatically changed the management of patients with fulminant hepatic failure, but the scarcity of available grafts and the rapid deterioration frequently observed in these patients increase the possibility that the transplant team will have to accept marginal donor organs, in some cases, even ABO-incompatible livers [2-4].

ABO-incompatible liver transplantation has been associated with significantly higher incidences of antibody-mediated rejections, lower patient and graft survival rates, and a high risk of hepatic artery thrombosis and biliary stricture compared with ABO-compatible transplants [5-8]. Previous reports have demonstrated that multiple plasmapheresis before transplantation can effectively reduce preformed antibodies to the donor-blood group antigen that bind to the vascular endothelium in the graft [9].

We report a patient with fulminant hepatic failure who received an ABO-incompatible liver transplantation with pretransplantation and posttransplantation double-volume total plasma exchange, splenectomy, and triple immunosuppression (tacrolimus, mycophenolate mofetil, and prednisone) in July 2003.

Case Report
A 23-year-old man with blood type B who had been hospitalized for elevated fever of unknown origin presented with fulminant hepatic failure with a progressive rise in liver enzymes. Owing to the deterioration of his clinical status, he underwent pretransplantation double-volume total plasma exchange and was placed on the National Transplant Coordination Center (Ankara, Turkey) list for an urgent liver transplantation. Forty-eight hours after being placed on the list, the first available donor in a nationwide search was of blood type A, and our patient’s level of unconsciousness led us to accept an ABO-incompatible organ. Orthotopic liver transplantation and splenectomy were performed. The systemic triple immunosuppressive regimen included tacrolimus, methylprednisolone, and mycophenolate mofetil. Bolus IV methylprednisolone was used for the first 7 days posttransplantation (1 g intraoperatively, 500 mg on day 2, 250 mg on day 3, tapered to 30 mg oral prednisolone on day 8 ). Target trough levels of tacrolimus were 15-20 ng/mL on days 0-7, 10-15 ng/mL on days 8-21, and 5-10 ng/mL thereafter. Mycophenolate mofetil was given orally (1 g b.i.d.). In addition to the systemic antirejection therapy shown above, high-dose polyvalent intravenous gamma-globulin (5 g q.d.) was administered during postoperative days 1-5.

A severe episode of cellular rejection that was responsive to pulse steroid treatment occurred on posttransplant day 12. Six weeks after the transplantation, the patient’s clinical status deteriorated, with the patient displaying a high fever, trembling, and leukocytosis. Blood tests were positive for cytomegalovirus by PCR analysis and pp65 antigen. He was diagnosed as having cytomegalovirus infection, which was responsive to parenteral ganciclovir (5 mg/kg b.i.d. for 14 days). Later, a biliary leak from the T-tube insertion point and bile collection in the subhepatic area occurred, for which percutaneous placement of a drainage catheter and prolonged T-tube follow-up were required. Following T-tube removal, the patient was discharged. His postoperative course (assessed on day 70) has been uneventful, and he has remained healthy during 18 months of follow-up.

Fulminant hepatic failure, which may be caused by a variety of factors, continues to challenge hepatologists and surgeons alike. The underlying liver disease may have a major impact on outcome and generally runs a rapid course with a high mortality rate. In randomized clinical studies, many artificial liver support devices have been examined, but none has been demonstrated effective enough to save lives. These systems are based on detoxification functions, using membranes and adsorbents, which can remove the putative toxins associated with liver failure. They include systems with whole blood exchange, charcoal hemoperfusion, plasma exchange with hemoperfusion, and hemodiabsorption with powdered-activate charcoal (BioLogic-DT, Hemotherapies, San Diego, Calif, USA). However, the molecular adsorbent recirculating system (MARS, Teraklin, AG, Rostock, Germany), which is based on hemodiabsorption with albumin, has gained much attention [10, 11]. One recent metaanalysis concluded that MARS treatment had no significant survival benefit in patients with liver failure when compared with standard medical therapy, and that further, well-conducted randomized trials needed to be conducted to define the role of MARS in the treatment of patients with liver failure [12].

Owing to the rapid deterioration in their clinical condition, patients with fulminant hepatic failure are usually listed as needing urgent liver transplantation, which is accepted as the best available treatment option. However, the scarcity of available cadaveric donors of recipients’ matched ABO blood groups obligates the transplant team to consider using ABO-incompatible hepatic grafts in these patients.

Expression of ABO antigens has been shown by immunohistochemical techniques on the hepatic artery, portal vein, capillary, sinusoidal lining cells, and bile duct epithelium but not on the bile ductule or hepatocytes [13]. Since anti-ABO isohemagglutinins (anti-A and anti-B) can mediate hyperacute, or accelerate acute, rejection, significantly higher incidences of rejection, hepatic artery thrombosis, and biliary stricture have been reported in ABO-incompatible grafts compared with ABO-compatible ones [6-8, 14].

Several studies have emphasized that multiple regimens of plasmapheresis before transplantation, which are crucial to avoiding humoral rejection, effectively reduce the pretransplantation titers of these antibodies, especially in live-donor liver transplantation. By performing double-volume total plasma exchange with plasma that is ABO compatible with both the patient serum and the donor liver, 90% of the immunoglobulin (Ig) can be removed, whereas a single-volume exchange removes only 67% [9, 15-17].

Splenectomy concomitant with grafting is routinely done in ABO-incompatible kidney transplantation based on the experiences of Alexandre and colleagues [18]. These authors found that patients who retained their spleens lost their grafts, whereas patients receiving splenectomy had no graft loss. Ishida and colleagues have shown that isohemagglutinin titers decreased to 1:4 in all patients and remained low during follow-up in 75% of transplantations after splenectomy in ABO-I kidney recipients [19].

Use of ABO-incompatible grafts for liver transplantation in highly urgent patients without preoperative total plasma exchange and splenectomy results in poor patient and graft survival rates [1, 5]. Encouraging results in ABO-incompatible liver transplantation with novel approaches, utilizing a combination of pre- and postoperative total plasma exchange, splenectomy, and enhanced immunosuppressive protocols with or without intraportal infusion therapies have been reported by various centers [3, 4, 20, 21].

Hanto and coworkers have reported a series of 14 patients receiving ABO-incompatible liver transplantation using total plasma exchange, splenectomy, and quadruple immunosuppression with actuarial 1-year patient and graft survival rates of 71.4% and 61.2%, respectively [20]. On the other hand, intraportal infusion therapy using continuous administration of gabexate mesylate, methylprednisolone, and prostaglandin E1 has been reported in 3 cases by Japanese centers as a novel approach in live-donor liver transplantation [4, 21].

The risk of viral reactivation is enhanced during acute rejection and increased immunosuppression following liver transplantation [22]. Although the seroprevalence of the donor was not provided, considering the recipient’s seropositivity for cytomegalovirus, prophylaxis with intravenous ganciclovir was given during the first 10 days of transplantation followed by oral acyclovir. The prophylaxis failed, however, and additional treatments with intravenous ganciclovir were required.

In our case, the patient received an ABO-incompatible graft and was treated utilizing pre- and posttransplant total plasma exchange, splenectomy, and triple immunosuppression. His postoperative course was uneventful, although he had severe cellular rejection and cytomegalovirus infection.

In conclusion, ABO-incompatible liver transplantations may be performed as a life-saving procedure in patients with fulminant hepatic failure utilizing protocols that remove existing isohemagglutinins and further reduce antibody production. 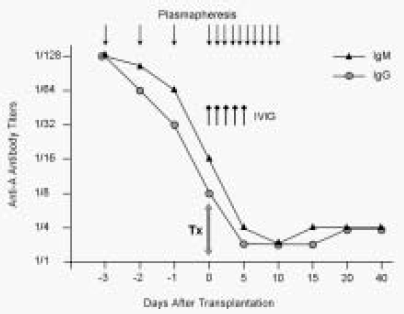