Background: Fungal infections are a major cause of morbidity and mortality after organ transplantation. The incidence of these infections has increased considerably over the last decade.

Objectives: The aim of this study was to evaluate the incidence of fungal infections, to identify the most common fungal pathogens, and to determine the associated risk factors in solid organ recipients.

Methods: One hundred twenty renal and 50 liver recipients were transplanted at the organ transplant unit of Nemazi Hospital in Shiraz, Iran, from September 2004 to August 2005 and were followed for fungal infections for at least 6 months. On admission to the hospital, all patients were evaluated for fungal colonization by mouth, vagina, urine, and rectal swabs cultured in Sabouraud Dextrose Agar. Samples of sputum, bronchoalveolar lavage, urine, cerebrospinal fluid (CSF), pleural tap, and tissue biopsy were evaluated by direct microscopic examination and were cultured for any clinical signs of fungal infections.

The mean time to diagnosis was 70 days after transplantation. The most common etiologic agent for fungal infections was Candida albicans.

Since no reports exist about fungal infections in kidney and liver transplanted patients in Iran, this study was designed to evaluate the incidence, identify the most common fungal pathogens, and determine the associated risk factors in patients who had been transplanted and followed in the transplantation unit of Nemazi Hospital at the Shiraz University of Medical Sciences in Shiraz, Iran.

One hundred twenty renal (51 cadaver and 69 living donors) and 50 liver (cadaver donors) recipients were transplanted at the organ transplant unit of Nemazi Hospital in Shiraz, Iran, from 2004 to 2005, and were followed for fungal infections for at least 6 months. Renal transplant recipients (RTRs) did not receive any antifungal prophylaxis, but liver transplant recipients (LTRs) received fluconazole (400 mg/day) for 21 days after transplantation. Liver recipients received prednisolone, cyclosporin A, and tacrolimus, while kidney recipients received triple therapy consisting of prednisolone, cyclosporin A, and azathioprine. None of them received antilymphocytic therapy.

On admission to the hospital, all patients were evaluated for fungal colonization. Mouth, vaginal, and rectal swabs were examined microscopically and were cultured in Sabouraud dextrose agar (Merck, Darmstadt, Germany). Midstream urine samples were centrifuged for 10 minutes at 2500 rpm and then cultured. Colonization was considered in asymptomatic patients with negative smears (from mouth, vagina, rectum, urine) and positive cultures, while infection was diagnosed in symptomatic patients with positive smear and culture results. During follow-up, whenever the clinician detected the signs of infection, laboratory tests (urine, cerebrospinal fluid [CSF], pleural and abdominal tap, and 3 sputum samples) for the diagnosis of fungal infection were done.

Cutaneous mycosis was characterized by the damage caused by proliferation of fungi in the keratinized tissues of hair, nail, and skin. To obtain the cutaneous specimens, skin surrounding the lesion was cleaned with alcohol, and the edge of the lesion was scraped for microscopic examination and culture. To detect ear infection, after consultation with the otolaryngologist, a sample of pus was used for lab tests.

After specific processing of the samples, direct microscopic examination was performed for all specimens, using an India ink preparation for CSF and a potassium hydroxide preparation for all of the samples. Subsequently, all samples were cultured on Sabouraud dextrose agar with and without chloramphenicol.

Fungal cultures were incubated at 30ºC for at least 4 weeks. Plates were evaluated daily for the first 7 days and at least twice per week thereafter. Blood samples were cultured using the bedside inoculation method into an automated blood culture system (BACTEC system, Becton-Dickinson, Sparkes, Md, USA) from those patients who had fever during their hospital stay.

Fungal infections in these recipients were evaluated on the basis of their clinical presentation, microbiologic and histopathologic findings, clinical course, and response to antifungal therapy. Diagnosis of IFIs was made in the presence of at least 1 of the following criteria [7-9]:

One hundred seventy solid organ transplants were performed at Nemazi Hospital in Shiraz, Iran, between September 2004 and August 2005. Fifty-four kidney recipients (45%) and 42 liver recipients (84%) had Candida colonization in different sites of their bodies (Table 1).

In kidney transplant recipients, the female-to-male ratio was 53:67, and the mean age of recipients was 35.2 years (range, 4-73 years). Fungal infections were diagnosed in 13 of 120 (10.8%) RTRs. Eight patients had cutaneous and mucocutaneous infections: tinea versicolor (4 patients), thrush (2 patients), perlèche (1 patient), and otomycosis (1 patient). The etiologic agents were Candida albicans, Malassezia furfur, and Aspergillus niger. IFIs occurred in 5 recipients (3 fungal pneumonitis and 2 severe esophagitis). Two of the infected renal recipients had received kidney from living donors, and 3 of them had received kidney from cadavers. All of the recipients with IFIs had been colonized with Candida, and 2 of them died.

The mean time for diagnosis was 70 days after transplantation (range, 14 days to 5 months). None of the patients with IFIs had a positive blood culture results. Lungs were the most common site of involvement. Five patients had pathologic findings on their chest radiographs. In 3 patients, infection was proven by endoscopy and a biopsy specimen from the esophagus. Eight patients with IFIs had colonization in their mouth, and 6 female patients had colonization of Candida albicans in their mouth and vagina. One case of meningitis was observed in a liver transplant recipient who was a drug abuser, 3 patients were diabetic, and 1 patient had systemic lupus erythematosus. Two patients had both cutaneous and systemic fungal infections. The etiologic agents in IFIs were Candida albicans and Aspergillus spp. Five patients with IFIs (55.5%) died, and the others were treated with fluconazole and amphotericin B (Table 3).

Cutaneous lesions can cause significant problems in solid organ transplant recipients, who are predisposed to superficial fungal infections because of immunosuppressive therapy. Cutaneous mycoses include dermatophytosis (ring worm), candidiasis (thrush), and pityriasis (tinea) versicolor. Other epithelial surfaces that can be affected by superficial fungal infections are the external ear canal (otomycosis) and the cornea (keratomycosis) [10].

It has been reported that intensive immunosuppression, long-term hospitalization, antibiotic consumption, and older age may be major predisposing factors for the high incidence of fungal infections [1, 2, 7, 14]. Recipients with coexisting diabetes mellitus are reported as being prone to fungal infections, particularly mucormycosis [7]. In our study, the mean age of patients with IFIs was 40 years, and the mean hospitalization periods were 14 and 40 days in RTRs and LTRs, respectively. There was a significant relation between colonization of Candida in mucosal tissues of the body (mouth, vagina) and fungal infection (P = .01). Among patients with IFIs, 88.9% had colonization with Candida spp. The female-to-male ratio for IFIs was 2 to 1. All women with IFIs also had Candida colonized in the mouth and vagina. We could not find any study showing a relation between fungal colonization in liver and renal recipients and IFIs. Candida albicans was the most frequent agent in our study. In other studies, Candida and Aspergillus were the most frequently isolated agents.

Renal and liver recipients with Candida colonization are at high risk for fungal infections; therefore, control of fungal colonization in liver and renal transplant candidates would reduce the risk of IFIs after transplantation. 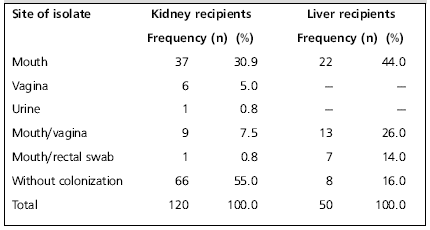 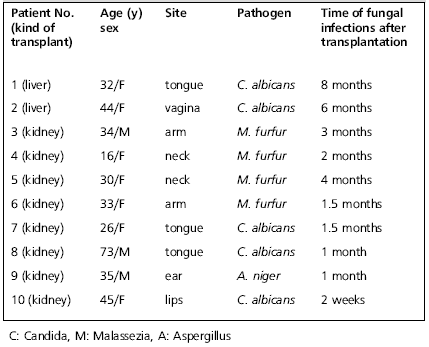 Table 3. Features of patients with IFIs