The prevalence of Kaposi’s sarcoma (KS) is much greater in organ transplant recipients than it is in the general population. Its etiology appears to be related to geographic, genetic, and viral factors. Treatment of transplant-related KS has, until now, consisted mainly of reduction of, or withholding of, immunosuppression, often with deleterious effects on both graft and patient survival.

In recent years, the immunosuppressive drug, sirolimus, has been demonstrated as possessing anti-neoplastic properties in both in vitro and animal models. In view of these properties and some preliminary clinical experience, we postulated that sirolimus would be beneficial in our patients who developed transplant-related KS. Here, we report the first case of a patient with both cutaneous and visceral KS who was successfully treated in the Middle East by conversion from a cyclosporine-based to a sirolimus-based immunosuppression regimen. The KS regressed completely within a few months after the conversion. The chronologic events and the extensive documentation, which included repeat computed tomography scans, are very suggestive of a selective anti-neoplastic effect of sirolimus.

Kaposi’s sarcoma (KS) is a relatively common neoplasia in renal transplant patients [1, 2, 3, 4, 5]. In the Middle East, the largest reported experience of KS is from Riyadh team [6]. In chemically immunosuppressed organ transplant recipients, treatment in the past has consisted mainly of reduction of immunosuppression with added chemotherapy [5, 7, 8, 9]. Recently, sirolimus has been explored as a possibly better immunosuppressive drug in these patients because of its antineoplastic properties, which have been demonstrated in both in vitro and in animal models [10, 11]. We therefore sought to study the effect of sirolimus on our patient with KS. We converted one patient with cutaneous and visceral KS from low-dose cyclosporine to sirolimus. Here, we report our successful experience with the first patient in the Middle East treated using this groundbreaking approach.

A 48-year-old man from the southern region of Oman was started on maintenance hemodialysis in April 2002 for end-stage renal disease of an undetermined etiology. He had no history of diabetes mellitus, hypertension, or renal disease within the family. He had not traveled to Africa. In August 2002, he underwent living-unrelated renal transplantation. His postoperative period was uneventful. There were no rejection episodes. Immunosuppression was accomplished with cyclosporine, mycophenolate mofetil, and prednisolone. Cyclosporine blood levels were assessed by C2 monitoring (cyclosporine blood level 2 hours after the ingestion of cyclosporine).

The patient was doing well, with stable renal functions, until November 2003 (13 months after the transplantation), at which time he noticed a purple skin lesion below the left lower eyelid, which measured 5 mm x 5 mm. At that time, his immunosuppression consisted of cyclosporine (150 mg b.i.d.), mycophenolate mofetil (1 g b.i.d.), and prednisolone (7.5 mg q.d.) His renal functions, as assessed by serum creatinine levels, were stable with values around 120-130 µmol/L. The biopsy of the skin lesion showed tissue with pleomorphic, bland-looking spindle cells arranged in interlacing bundles or sheets with occasional mitosis. Endothelial-lined vascular channels and small-sized blood vessels were seen between the spindle cells. The clinical picture was compatible with a diagnosis of KS. Further investigations included chest computed tomography (CT) scan, abdomen CT scan, and upper gastrointestinal endoscopy. The abdominal CT scan revealed enlarged abdominal lymph nodes in the retrocrural areas, the biggest being 20 mm. Results of the chest CT scan and the upper gastrointestinal endoscopy were normal. Cyclosporine was reduced progressively to a minimum of 50 mg b.i.d. and mycophenolate mofetil was reduced immediately to 500 mg b.i.d. The dosage of prednisolone was kept the same at 7.5 mg.

By May 2004, no new lesions had appeared. By this time, the eyelid lesion had diminished in size by approximately one third, and remained at this size until the introduction of sirolimus later on. The follow-up abdominal CT scan in May 2004 showed a slight but not substantial decrease in the size of the largest lymph node to 19 mm. In September 2004, a repeat abdominal CT scan showed the lymph node to be 18 mm. At this point, the cyclosporine dosage was 50 mg b.i.d.

At this time, a decision to stop cyclosporine and start sirolimus was made. A loading dose of 6 mg was given for 1 day, followed by 2 mg q.d. Target blood sirolimus levels were 8-10 ng/mL. The eyelid lesion started to decrease in size soon thereafter. In less than 3 months, by December 2004, the eyelid lesion had disappeared completely, and a repeat abdominal CT scan showed that the biggest lymph node had decreased to 6 mm. The sirolimus regimen was continued unchanged. A subsequent abdominal CT scan, performed in April 2005, showed complete regression of the abdominal lymph nodes. The blood level of sirolimus was 7.4 ng/mL. The serum creatinine level during the whole course was stable, with values ranging between 120-130 µmol/L. Table 1 shows the dates of the abdominal CT scans, the sizes of the biggest lymph nodes, and the immunosuppression regimen.

Moriz Kaposi first described KS in 1872. His 5 patients were described as having “sarcoma idiopathicum multiple hemorrhagium.” By 1914, Hallenberg had already noticed the high prevalence of this disease in Africa. The relationship between immunosuppression in transplant patients and KS was reported in the 1960s [12]. The disease became widely known in the 1980s when it became associated with HIV/AIDS.

KS is now recognized as being a relatively common neoplasia after transplantation. Its prevalence seems to be influenced by geographic and genetic factors [7, 8]. It is more prevalent in the Middle East than it is in western countries [7, 8]. Its prevalence in comparison with other neoplasias is also relatively high in Spain, Italy, and Greece with figures of about 8.4%, 11.5%, and 24% respectively [1, 2, 3, 5]. In South Africa, nonwhites are more prone to develop this tumor than are white persons in the same area [13]. Sex, also, is a predisposing factor, as KS is more prevalent in men than it is in women [7].

KS is associated with human herpes virus 8 [14, 15]. The activity of KS seems to be related to the viral load of the herpes virus [16]. The virus may be reactivated after transplantation or may be transmitted through the transplant [15, 17]. Virologic and molecular studies have shown similarities between the donor and recipient markers [15, 17]. Nevertheless, not all patients who carry the virus or who seroconvert after transplantation will develop the sarcoma. A substantial number of patients will carry the virus without developing KS [4], which indicates the necessity of the intervention of other factors to develop the disease. Cyclosporine use also has been associated with this sarcoma [1].

KS is associated with reduced graft survival, most likely due to the necessity of immunosuppression reduction [7, 8]. It is also associated with a higher mortality rate compared with patients who do not develop the disease [1, 5].

Until recently, treatment of transplant-related KS consisted mainly of reduction or cessation of immunosuppression. This approach was associated with remission rates of 32% and 60%, respectively. However, these approaches are associated with deterioration of renal function in approximately 65% of patients [8]. Additional treatment with chemotherapeutic agents and local radiotherapy may be indicated in some cases [5]. Foscarnet has been used successfully in a patient [18]. Anti-CD 20 also has been used successfully in another patient [19]. There is an interesting report of spontaneous regression of KS during pregnancy [20]. Another study reports the regression of KS after conversion from cyclosporine to mycophenolate mofetil [21].

The antitumoral effects of sirolimus have been demonstrated both in vitro and in animal studies [10, 11]. These findings have led to the postulate that patients with KS may benefit from the effects of sirolimus administration. There is some exploratory clinical experience outside the Middle East with using sirolimus for transplant-related KS. Campistol and colleagues were the first to report complete regression of KS in 2 patients after conversion to sirolimus [22]. Stallone and coworkers also have recently reported complete regression of cutaneous KS in 15 patients after conversion from cyclosporine to sirolimus [23]. However, none of their patients had visceral sarcoma. Zmonarski and coworkers from Poland, where the tumor is not common, also have reported regression of KS in 2 patients after conversion from calcineurin inhibitors to a sirolimus-based regimen [24]. One patient had palatal mucosa and cutaneous lesions, while the other patient had, in addition to the previous lesions, pulmonary lesions and mediastinal lymphadenopathies.

Our experiences in our patient, the first reported in the Middle East (with thorough documentation, especially of the regression of abdominal lymph nodes), are highly encouraging. The patient had a partial initial response to cyclosporine dose reduction. Nevertheless, the lesions remained unchanged for 3 months until sirolimus was introduced and cyclosporine was completely stopped. The cutaneous and the visceral lymph nodes showed remarkable improvement 3 months after starting sirolimus. The cutaneous lesions completely regressed after 3 months with a marked decrease in the size of the lymph nodes. The lymph nodes completely disappeared soon thereafter. A remarkable element is that renal function remained stable, with a serum creatinine of 120-130 µmol/L. No infection or rejection episodes occurred during or after the conversion. The only adverse event was the development of acne. While the withdrawal of cyclosporine may have played a role in the regression of the KS lesions, the temporal sequence of events, clearly documented in our patient, is very much in favor of a specific antineoplastic role of sirolimus.

In conclusion then, introduction of sirolimus in this patient permitted complete regression of the sarcoma with preservation of excellent renal function. We think that it is time for a controlled, multicenter trial to clarify the place of sirolimus in the management of transplant patients with KS. Meanwhile, in view of the available observational reports, we think that sirolimus should be included in the standard treatment for KS after transplantation to permit remission of the sarcoma while preserving the renal function. 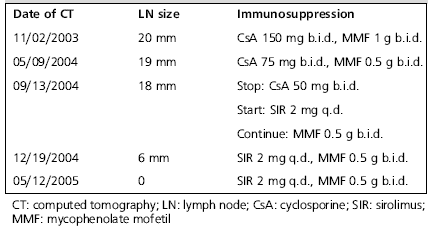