Conclusions: These results suggest that MPACmin is a poor correlate of clinical outcome and state of immunosuppression. Although the usually recommended dosage of MMF (2 g) may be associated with acute rejection, low-dose MMF (1 g) seems to constitute a higher risk.

The introduction of mycophenolate mofetil (MMF) has significantly improved the clinical outcome of transplant recipients [1]. Therapeutic drug monitoring of mycophenolic acid (MPA), the active metabolite of MMF, may minimize the risk of acute rejection after transplantation and lower toxicity [2-3]. Recent publications, however, reveal conflicting results regarding the correlation between plasma MPA levels, clinical efficacy endpoints, and drug-related adverse effects in autoimmune diseases and solid organ transplantation [3-6]. We and others have recently reported a poor correlation between cyclosporine (CsA) blood trough (Cmin) and maximum (Cmax) concentrations, graft outcome, as defined by histologic findings (acute rejection and nephrotoxicity), and immune responsiveness as assessed by total lymphocyte count (LC) in kidney transplant patients [7-11]. The aim of this study was to monitor plasma trough levels of MPA (MPACmin) in kidney transplant patients, assess the relationship between MPACmin and MMF dosage, and correlate these 2 parameters with the LC (a rough indicator of the immune state) and the clinical diagnosis as defined by the histologic findings of graft biopsies and serum creatinine (Scr) level.

Thirty patients (19 men, 11 women; mean age, 39 years; range, 20-67 years) were included in the study. Seven patients assigned to the rejection group (REJ) exhibited biopsy-proven acute rejection (Scr level: 132 ± 8 µmol/L). Graft biopsies were performed within the first 6 months after transplantation. The remaining 23 patients, with an uneventful course within the same posttransplant period, had normal graft function with a mean Scr level of 88 ± 17 µmol (P < .001) and were assigned to the normal group (NOR). All patients were first-time kidney transplant recipients matched for age, sex, weight, donor type, number of human leucocyte antigen (HLA) mismatches, and panel reactive antibody (PRA) negativity. They received similar induction therapies with an anti-thymocyte globulin (ATG-Fresenius) during the first week posttransplantation to maintain a CD4 count of <= 50 for a total of 12-16 mg/kg body weight and were maintained on a CsA-based (initial dosage, 7 mg/kg) triple therapy with MMF and prednisone. MMF was started at 2 g per day (1 g b.i.d.), and dosages ranged between 1-2.5 g/day throughout the study. MMF dosage was adjusted to maintain an MPACmin between 1.4 and 2.5 µg/mL. Prednisone dosage was tapered to 0.1-0.2 mg/kg body weight at 3 months’ posttransplantation.
MPACmin was determined by a monoclonal antibody-based ELISA kit (Trans Med International, Beirut, Lebanon) in all patients at the same time after transplantation (during graft biopsy) and when the MMF dosage was adjusted. Likewise, CsA monitoring parameters were determined using monoclonal antibodies (TDX method, Abbott) in whole blood at 1 hour (C1) and 2 hours (C2) after drug ingestion and in lymphocytes (LTmL) using the method described by Masri and colleagues [12]. Cmax and LTmL were considered as representing the highest CsA whole blood concentration and its corresponding maximum lymphocyte content. Cmax and LTmL were expressed in hg/mL and picograms per lymphocyte (pg/Lc) respectively. CsA dosage was tapered while maintaining an LTmL greater than 40 pg/Lc irrespective of Cmax. Results are expressed as means ± SD and were compared using the Student t and chi-square or Fisher exact tests when appropriate. Differences were considered statistically significant at a value of P less than .05.

Significant interindividual variations were observed when MPACmin were analyzed in relation to MMF dosage (Figure 1). This was associated with a 4- to 5-fold difference between patients receiving the same MMF dosage. This finding also resulted in a lack of correlation between MMF dosage and MPACmin
(R2 = 0.027). Likewise, when the total LC was compared according to MMF dosage ranges, a marked difference in LC among patients was noted, ranging from 4- to 7-fold, which led to a poor relationship (R2 = 0.08) between LC and MMF dosage (Figure 2). Moreover, analysis of individual MPACmin values failed to show any significant correlation (R2 = 0.05) with LC (Figure 3). A comparison of MMF monitoring parameters (dose, MPACmin) and LC in relation to the clinical diagnosis at the time of the biopsy is summarized in Table 1. Patients in the REJ group had similar MMF dosages, MPACmin, and LCs when compared with those in the NOR group. Interestingly, mean CsA LTmL was significantly lower in patients in the REJ group than it was in patients in the NOR group (27 vs 68 pg/Lc, P < .02) despite comparable mean CsA dosages (3.5 vs 4.1 mg/kg, P = ns) and Cmax (638 vs 762 ηg/mL, P = ns). While rejection rates were comparable irrespective of MPACmin ranges (Figure 4), a tendency toward higher rates was noted with the 1-g dosage (30%) when compared with the 1.5-g and 2-g dosages (12.5% and 11.7%). Owing to the small number of patients, this difference, although important, did not reach a level of statistical significance. Surprisingly, the mean MPACmin in all patients when analyzed in relation to CsA dosage ranges (2-7 mg/kg) (Figure 5) remained nearly unchanged and within therapeutic ranges, despite a significant MMF mean dosage reduction, suggesting a positive impact of CsA tapering on MMF bioavailability.

Our data clearly indicate a substantial interpatient variability in MPACmin within either the same or different MMF dosage ranges (Figure 1). These findings are in agreement with recent observations [4, 13-17]. Bullingham and coworkers [13] have reported considerable variation in pharmacokinetics, up to a 10-fold difference between patients, on a fixed MMF dosage (2 g/day). In our series, up to a 5-fold difference was observed between patients at the 2-g dosage. These variations may be related to the combined effects of both genetic and environmental parameters such as renal and liver function, serum albumin level, and concomitant administration of other immunosuppressive agents [18-24]. These factors may influence the absorption, metabolism, or excretion of MPA, which are the major determinants of drug bioavailability, as has been reported for other immunosuppressive drugs such as CsA and tacrolimus [25-28]. This could explain the lack of correlation between MMF dosage and bioavailability, reflected by the MPACmin, that we observed in our patients. During the study period, all patients had normal serum albumin levels, normal results on liver function tests, and none exhibited major renal function impairment. Inosine monophosphate dehydrogenase (IMPDH) is the intracellular target enzyme for MMF through its active metabolite MPA. IMPDH inhibition leads to an arrest of lymphocyte proliferation [23]. Langman and coworkers have shown an overall inverse correlation between peak MPA concentration and IMPDH activity [29]. However, in individual patients, maximum inhibition of IMPDH activity did not always coincide with the time of maximum total MPA concentration. Moreover, considerable interindividual variation in the degree of IMPDH inhibition at similar MPACmin has been recently reported [30]. These discordances between MPA concentrations and the degree of IMPDH inhibition between patients and among different species [31-32] could be due to differences in the mechanism of MPA uptake into target lymphocytes. This is supported by the observation that IMPDH inhibition is more pronounced in lysed as compared with intact lymphocytes [29]. Other possible explanations for this discordance may be the significant difference in baseline IMPDH activity levels and the IMPDH activity recovery capacity among patients as was recently shown [33] (which are probably genetically related). Further, in vitro studies [34] have revealed that free-MPA concentrations may better correlate with the degree of inhibition of IMPDH than measurement of the total MPA, since free MPA might more accurately reflect the immunologically relevant drug concentration. These observations seem to indicate a lack of correlation between MPACmin (a reflector of bioavailability) and IMPDH activity (a marker of bioactivity). Our results regarding the poor relationship between the LC (a rough indicator of immune responsiveness) and both MMF dosage and MPACmin (Figures 2 and 3) clearly support these findings. These data are also in agreement with our recently reported work regarding the poor relationship between CsA blood levels and LC [7, 9] and the results of others regarding the weak correlation between CsA blood levels and the degree of calcineurin inhibition [35, 36]. These observations confirm the unquestionable discrepancy between drug pharmacokinetic and pharmacodynamic effects and hence, between bioavailability and bioactivity.

In addition, our data clearly demonstrate a poor association between clinical events (mainly acute rejection) and both MMF dosage and MPACmin. In fact, at the time of the graft biopsy, REJ patients had comparable MMF dosages and MPACmin compared with patients in the NOR group (Table 1). The rejection rates were comparable irrespective of MPACmin ranges (Figure 4). Similar observations have been recently reported [6, 37]. This could be explained by the interindividual variabilities in MPACmin at similar MMF dosages [4, 13-17, 29] and the variability in immune responsiveness at similar MPA plasma concentrations as reflected by the LC and the degree of IMPDH activity as has been shown in the present study (Figure 3) and by others [30, 31, 33, 37]. Other factors could contribute to differences in immune state and patient outcomes such as differences in immunosuppression dosage during the induction phase, concomitant maintenance therapy (consisting mainly of CsA and steroids [22, 38-41]), or after transplantation [23, 24, 42]. This is unlikely to be the case in our study, however, since all patients were subjected to the same induction protocol and the same steroid tapering regimen. Moreover, both groups had the same MMF dosage with comparable MPACmin therapeutic levels. This excludes any possible interference of the above-mentioned parameters in the observed results. Furthermore, data from the NOR group were obtained at the same time after transplantation as when the graft biopsies were performed in the REJ group.

Interestingly, the mean CsA maximum lymphocyte content (LTmL) was significantly lower in patients in the REJ group than it was in patients in the NOR group despite comparable mean CsA dosages and Cmax. This seems to indicate that monitoring CsA lymphocyte levels might more accurately reflect the immunologically relevant drug concentration and hence, provide a better correlate with clinical events [7, 9]. While rejection rates were comparable irrespective of MPACmin ranges, they were noticeably lower in the 1-g MMF dosage as compared with the 1.5-g and 2-g dosage ranges. Owing to the small number of patients, this difference did not reach statistical significance. Although no definite conclusion could be drawn, it seems, however, safer to avoid tapering the MMF daily dosage below 1.5 g in high-risk CsA-treated kidney transplant recipients. Our current observations regarding the positive impact of CsA tapering on MMF bioavailability (as illustrated in Figure 5) are in accord with recent reports [22, 38-40], This may be explained by a smaller inhibitory effect of CsA on a transporter present in the hepatobiliary membrane that is important for mycophenolic acid glucuronide (MPAG) enterohepatic recirculation [38].

In conclusion, our study clearly demonstrates a poor association between MPA plasma trough level (MPACmin) and clinical outcome, mainly acute rejection. The weak correlation between MPACmin marker of drug pharmacokinetic profile and LC (a rough indicator of immune response and a marker of drug pharmacodynamic effect) strongly indicate an obvious discrepancy between MPA pharmacokinetic and pharmacodynamic effects and hence, between bioavailability and bioactivity. This difference is probably multifactorial, mediated by both genetic and environmental factors. Monitoring of MPACmin appears to be a poor correlate of clinical efficacy and may mislead clinicians into drawing wrong conclusions. Ongoing trials on the role of area under the curve monitoring in predicting efficacy and toxicity may provide the answer. Monitoring MPA lymphocyte content as for CsA at the site of action (a more accurate reflector of the immunologically relevant drug concentration) could become the new alternative for MMF therapy monitoring. 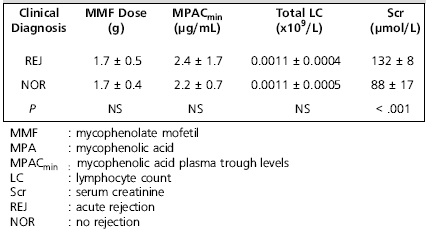 Table 1. Relationship between clinical diagnosis and MMF monitoring parameters (dose and MPA plasma trough level MPACmin) and total LC. Data from the NOR group were obtained at the same time after transplantation as when graft biopsies were performed. Patients with biopsy-proven acute rejection were assigned to the REJ group and those with normal graft function were assigned to the NOR group. 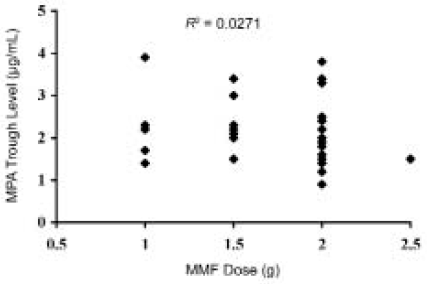 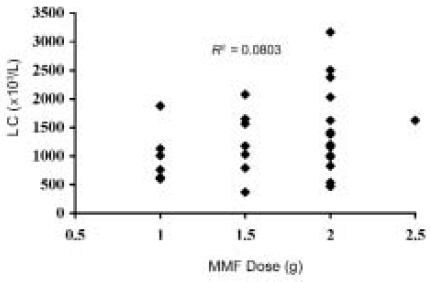 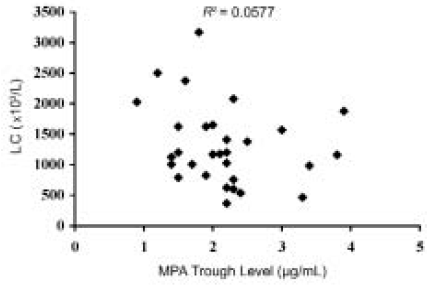 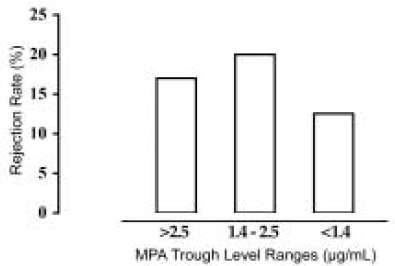