Objectives: African-American kidney allograft recipients have higher rates of rejection than do white patients. This study was performed to determine whether the use of immunonutrients may reduce the incidence of rejection in African Americans.

Materials and Methods: Two studies have been done at our institution that demonstrate that immunonutrients can reduce the incidence of rejection, calcineurin inhibitor toxicity, and cardiovascular risk factors. The data were analyzed to determine whether or not a preferential benefit exists for race.

Conclusions: Immunonutrients appear to have a preferential beneficial response in reducing rejection in African-American patients. A randomized, prospective, clinical trial is warranted to further elucidate these results.

Recently, we performed 2 prospective clinical trials that used immunonutrients (arginine 4.5 g b.i.d., a lipid high in omega-3 fatty acids [canola oil, 15 mL b.i.d.] or Coromega [European Reference Botanical Laboratories, Carlsbad, Calif, USA], 5 packets/day equaling 1,450 mg eicosapentaenoic acid and 950 mg docosahexaenoic acid). The first trial was a prospective randomized study without Thymoglobulin induction in which 76 patients were treated with supplements (arginine and canola oil), and 71 patients were allocated to a control group (same immunosuppressive protocol but no supplements) [2]. The second study was a pilot study of 96 patients to determine if corticosteroids could be avoided completely and calcineurin inhibitors (cyclosporin A) eliminated early on in patients who also were treated with Thymoglobulin induction, rapamycin, mycophenolate mofetil (MMF), and immunonutrients. MMF was discontinued after 2 years in 37 of 54 patients (68.5%) (submitted for publication). All protocols, experimental studies, and clinical trials involving human subjects were approved by the ethics committee of our institution before the study began, and all conformed to the ethical guidelines of the 1975 Helsinki Declaration. Written informed consent was obtained from each patient or their guardian(s).

In the first study, 12 African Americans received nutritional supplementation, whereas 26 did not. In the second study (with Thymoglobulin), all 12 African Americans received immunonutrients. One-year biopsy-proven rejection rates were lower in the African Americans who received supplements (1 of 24, 4.2%) compared with African Americans who did not receive supplements (7 of 28, 25%) (P < .011) (Figure 1). This is comparable with rates of 18.2% and 18.6% in white persons for those receiving supplements or those not receiving supplements, respectively. The 1 African-American receiving supplements who had a rejection episode had it within 30 days and had not received Thymoglobulin. None of the remaining 22 patients had a rejection episode during 2-year follow-up. During this same period (1998-2002), an additional 56 African-American patients were treated at our center using other protocols not involving immunonutrients. Rejection occurred in 25% of the African Americans compared with 18.8% of white persons. One patient who was assigned to take supplements was excluded from the study because he did not take them, moved out of town, and was lost to follow-up. During this same time, UNOS reported that 21.1% of the 9785 African-American patients with kidney transplants with data sufficient for analyses had a rejection episode during the first year. However, during this same time, 36.2% of the patients were excluded from the analysis either because their data were not recorded or they had an unknown rejection status.

The reasons for a lower incidence of rejection in African Americans compared with white persons are unknown. However, it is well known that both omega-3 fatty acids and omega-9 fatty acids can influence allograft survival in animals [3], and it may be possible that dietary fats are metabolized differently in African Americans than they are in whites. Knutsen and colleagues performed an interesting study in which they correlated the estimated intake of dietary fats with adipose tissue biopsy results [4]. They found relatively good correlations between African Americans and whites except for monosaturated fatty acids, in which the correlations were 0.35 for AA and 0.03 for whites, suggesting that the metabolism may be different between the 2 races.

It is also well known that certain drugs, like MMF, are metabolized at a faster rate in African Americans than they are in white persons, and that this results in lower serum concentrations and therefore, less therapeutic effectiveness [5]. Schweitzer and coworkers [6] have reported that MMF is less effective at reducing the risk of acute rejection in African Americans than it is in white kidney recipients.

Regardless of the mechanisms, these preliminary data suggest that dietary supplements with arginine and lipids containing omega-3 and omega-9 unsaturated fatty acids may have a selective beneficial effect in reducing the incidence of rejection in African Americans. Further randomized prospective clinical trials are warranted to clarify these results. 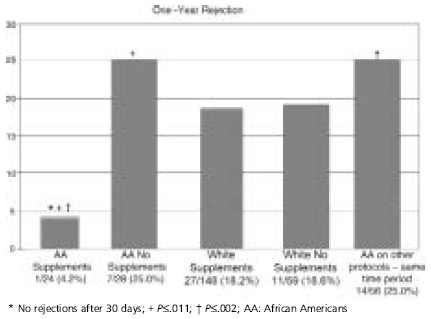